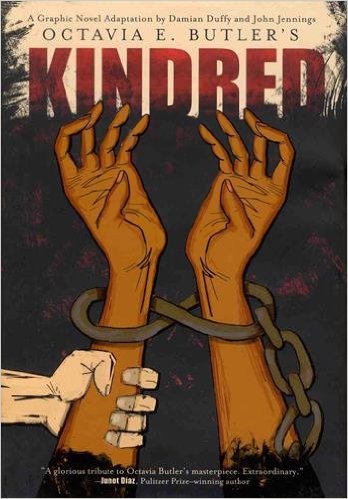 "Octavia Estelle Butler, often referred to as the “grand dame of science fiction,” was born in Pasadena, California on June 22, 1947." "With the publication of Kindred in 1979, Butler was able to support herself writing full time.  She won the Hugo Award in 1984 for her short story, “Speech Sounds,” and in 1985, Butler’s novelette “Bloodchild” won a Hugo Award, a Nebula Award, the Locus Award, and an award for best novelette from Science Fiction Chronicle.Source: http://octaviabutler.org/bio/

"Damian Duffy is a cartoonist, scholar, writer, curator, lecturer, teacher, and a Glyph Comics Award-winning, New York Times Bestselling graphic novelist. He holds a MS and PhD in Library and Information Sciences from the University of Illinois at Urbana-Champaign." Source: http://damianduffy.net/about/

"John Jennings is Associate Professor of Visual Studies at the University at Buffalo and has written several works on African-American comics creators. His research is concerned with the topics of representation and authenticity, visual culture, visual literacy, social justice, and design pedagogy. He is an accomplished designer, curator, illustrator, cartoonist, and award-winning graphic novelist." Source: Amazon.com.

Everyone is invited - UWB/CC students, faculty, staff, and community members. According to writer Shawn Taylor, Kindred: A Graphic Novel Adaptation "takes everything that makes Kindred an indispensable work of art and, through some crazy artistic synergy, elevates it." Join us to share your thoughts!

Looking for the book?

Information about copies of Kindred: A Graphic Novel Adaptation available online, at the Campus Library, and elsewhere is listed below.

Even if you're only able to read part of the book before the event, please join us! There will be no pop quizzes, we promise!

Text on this page created by UW Libraries is licensed under a CC BY-NC 4.0 License. Images and video are not included.See details.

Land Acknowledgment: The University of Washington Bothell & Cascadia College Campus Library occupies Land that has been inhabited by Indigenous Peoples since time immemorial. Specifically, this campus is located on Sammamish Land from which settler colonists forcibly removed Coast Salish Peoples to reservations in the mid-19th century. Today, descendants of the Sammamish are members of several Coast Salish communities.