During Autumn quarter, 2015, the UW Ethnomusicology program was honored to host Jose “Lalo” Izquierdo, a musician and dancer of international stature and a leading figure in the movement to research and promote Afro-Peruvian music and dance. In the 1960s and 1970s, as a founding member, lead dancer, and choreographer for Peru’s renowned dance/theater company Peru Negro, Lalo helped to establish a repertoire of dance and music that today is widely recognized, alongside Peru’s indigenous and criollo traditions, as part of Peru’s artistic heritage. During his residency at UW he imparted a systematic knowledge of Afro-Peruvian culture to both music and dance students, participated in dialogues and classes on campus, shared the stage with local musicians in a variety of venues, and participated in a series of community workshops and events organized by Movimiento Afro-Latino de Seattle (MAS), a community-based arts coalition. Lalo’s residency was also an occasion for collaboration between the School of Music, the UW Dance program, the Latin American and Caribbean Studies program (LACS) and the African Studies Program (ASP) at UW. An important partner in this residency was Monica Rojas, who serves both as the Assistant Director of LACS and ASP at the university and also as founder and Executive Director of MAS in the community.

At the School of Music Lalo taught Musap 389/589, “World Music,” in which students learned to play the Peruvian cajón, as well as other percussion and singing. Over the course of one quarter they learned the rhythms of the Afro-Peruvian festejo and lando genres, as well as songs. Students met once a week for ensemble practice, and once for an individual lesson in Lalo’s studio.

In the Dance program,  Lalo taught choreographies that he had developed for Peru Negro. In twice-a-week classes Lalo taught the dance movements and accompanied the students on the cajón. Music students also helped accompany.

Class Visits and other campus activities

Lalo made special presentations about Afro-Peruvian culture in Music 162 (American Folk Song), taught by Christina Sunardi, and in Music 433 (Latin American Music), taught by Shannon Dudley. He served as a discussant for the film, “El Quinto Suyo: Afrodescendientes en el Peru,” in a film series about Afro-Latino culture organized by Monica Rojas and Ileana Rodriguez Silva (Associate Professor of History) in Mary Gates Hall. He also participated with other MAS artists in a panel titled, “Diaspora, Movement, and Memory,” in Communications 120.

Lalo’s residency was scheduled to coincide with with a fall 2015 Afro-Latino Arts Education Season (Oct 11th-Nov 21st) organized by MAS (Movimiento Afrolatino Seattle), with funding from the City of Seattle Department of Neighborhoods and 4Culture.The center-piece of these activies was a 5-week series of workshops at Casa Latina offered by artists from diverse Afro-Latino traditions. Lalo served as a teaching artist in this series, giving weekly workshops on Afro-Peruvian music and dance.

Performances at the University of Washington 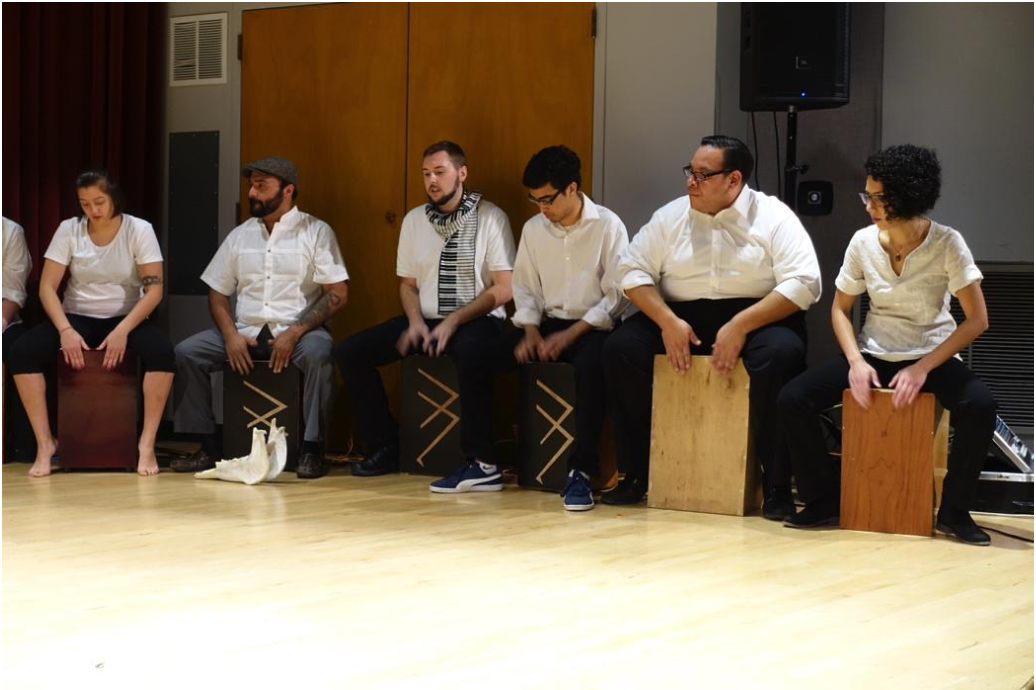 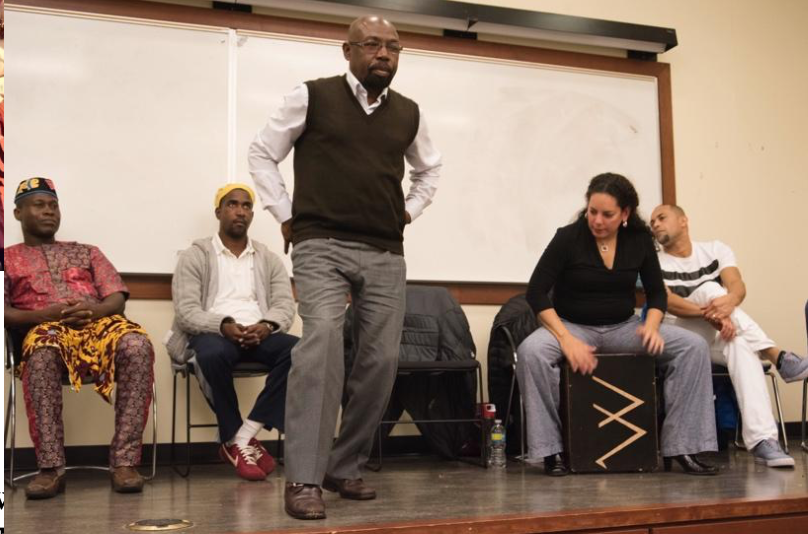 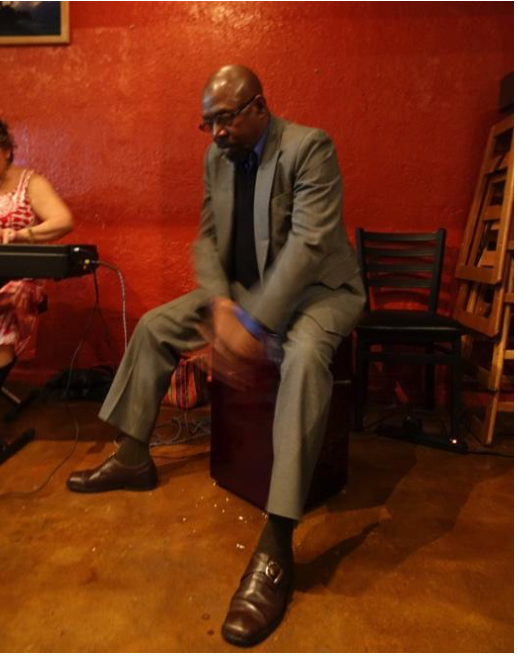 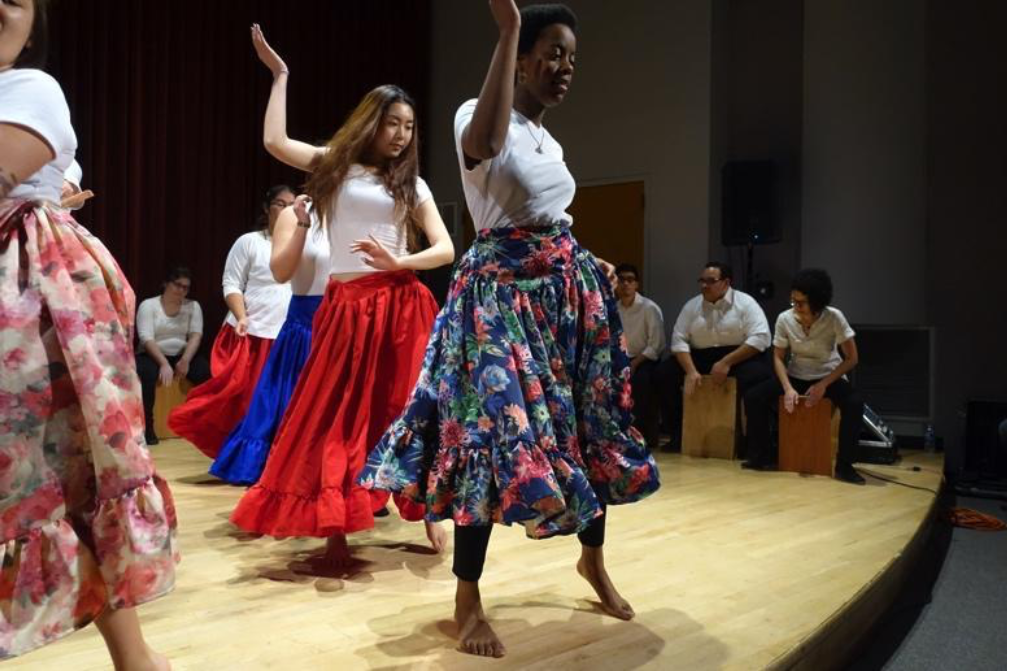 Before I went to the workshop, I was very afraid of associating with people from different cultures .... However, all the people at the workshop welcomed me and helped me understanding the lyrics, so I could truly mix in to the workshop and the community. It felt like they were really close to each other and enjoy the music. People were dancing and singing together like they are family .... It was a really great experience for me to mingle with people from different cultures and learn Afrolatino culture.

The workshop's teacher, Diego, greeted me and explained the workshop was based around interconnection and cooperation.... Since audience members of traditional Columbian assemblies were as much creators of the music as the players of the instruments themselves, we would be assembled the same way.

The teacher was there to teach about Colombian music but he seemed to me somebody who is always ready to learn as much as he is going to teach. How he talked and interacted with us as his students was something I personally learned a lot from. He took interest and he involved himself as well. Looking for connection.... It was a good experience and I was thankful that we have the opportunity in Seattle to experience such things.

We stretched and warmed up with some of the more simple feet, leg, and hip motions, which seemed easy enough at first until Dora started building on the movements and adding them to music .... After the first hour, she gave us a water break and talked to us more about why she was teaching us the way she was. She explained about the Orishas and how the religion in Brazil had a god for everything, and she told us that many of the motions that she was teaching us were symbols of the different Orishas.

Attending the MAS workshops was enlightening and rewarding. Along with what we learned in class by attending these workshops I gained a better understanding of Brazilian culture.

I was the only person in the workshop who was not fluent in Spanish so the class discussions shifted between Spanish and English. I was glad to have an opportunity to work on my Spanish language skills.... I was fascinated to learn of the similarities and differences between the Garifuna people and other Afro-Caribbean peoples due to the unique history of the Garifuna. I enjoyed getting to know the other members of our workshop group and conversing about immigration, national identity, and linguistics.

I went to two workshops with my mother and so it was a great experience learning about two other Latin cultures, being that both my mother and I are Hispanic and from Mexican descent.... I am glad that our community has these series of workshops because to me it is important for us to get involved in our community and explore cultures other than what we are used to.... The [Garifuna] men would play according to our own dance moves by following the beat of our movements. It was easy for me to get comfortable because the music was very fun and uplifting, it was almost impossible not to smile! .... The main difference between the Garifuna dancing and Venezuelan dancing was evident because instead of us dancing in front of men and them watching us closely to match the drum beats with our dance moves, we were supposed to be more reserved. Our teacher described the woman’s dancing as though she is holding a secret.

I have personally always learned music in a classical, private lessons structure and never did any music classes in a group since I was in high school, but even during these times I was in ensembles that were very performance driven and interested in producing results. This class was much more about connecting people with the culture and community of Venezuela more than it was about getting all the rhythms correct.

These rhythmic patterns were multiple bars in length and were deceptively hard to memorize on the spot.... Lalo made it clear that it was important which hand was used to strike the drum. This was interesting to me because you might think the only important thing was what area of the drum was struck, but to him it mattered whether you used the right or left hand and in the proper order.

Lalo taught almost exclusively in Spanish, a language which I speak very little of, which sometimes made it difficult to understand everything he was saying. However, Lalo was nice enough to split the group into two smaller groups to accommodate those of us who were less experienced or who had not attended all classes.

The best part of the whole workshop experience happened after the second session. The guitar instructor and I kept playing together, jamming over tango backgrounds back and forth for about half an hour after the session ended.

I greatly appreciate the fact that attending these workshops was incorporated into the curriculum of our class because it’s a perfect way of exploring the Latin cultures and the communities within Seattle while we learn about it in class. I would love to try my hand at the other dances that MAS offers as well as the music workshops where we can learn to play instruments. So many great opportunities and it’s crazy to think that they are all free! I’ll definitely be looking out for events and workshops MAS holds in the future.