During Winter quarter, 2014, the UW School of Music was privileged to host Dr. Pablo Luis Rivera as a visiting artist who taught Puerto Rican bomba music and dance.  This residency was also supported by the UW Dance Program, and was structured to facilitate multi-disciplinary teaching and community engagement.

Dr. Rivera taught two classes: Musap 389/589, “World Music,” and Dance 231, “Folk-Social Dance Forms,” which had a combined enrollment of 46 students from diverse disciplines. Students enrolled in Musap 389/589 studied percussion and singing in small studio sections with two or three people at a time, and also met once a week for an ensemble class in which the primary focus was on dancing. Because bomba entails an intricate improvisational dialogue between a dancer and the primo (lead drummer), music students were required to work on all the elements of bomba—percussion, song, and dance. In Dance 231, which did not include small group instruction, students focused mainly on dancing. Expert support on the primo drum was provided by Seattle-based percussionist Ricardo Güity, and music faculty and students also played and sang for the dance class when they were able.

On March 4th Dr. Rivera organized a dynamic event in Brechemin auditorium, which integrated expert performances by Rivera and Güity, narrative explanation of bomba, student choreographies, and an open invitation at the end for students and the public to enter the “batey” and and improvise with the primo. Several students noted that this event was powerful experience for the way it transformed the traditional concert hall etiquette and actively engaged everyone present (see excerpts from student reports below).

Bombango
The main community event organized in conjunction with Dr. Rivera’s residency was a “bombango” at Casa Latina on Sunday, March 16 . The bombango was hosted by the Seattle Fandango Project, a community arts group that includes UW faculty and students. The UW School of Music contributed funds to bring guest artist Ivelisse Diaz from Chicago, who helped lead a combined bomba/fandango workshop the saturday prior the bombango. The bombango was a joyous event that drew around 100 participants and was documented by UW Communications professor Scott Macklin in this video. 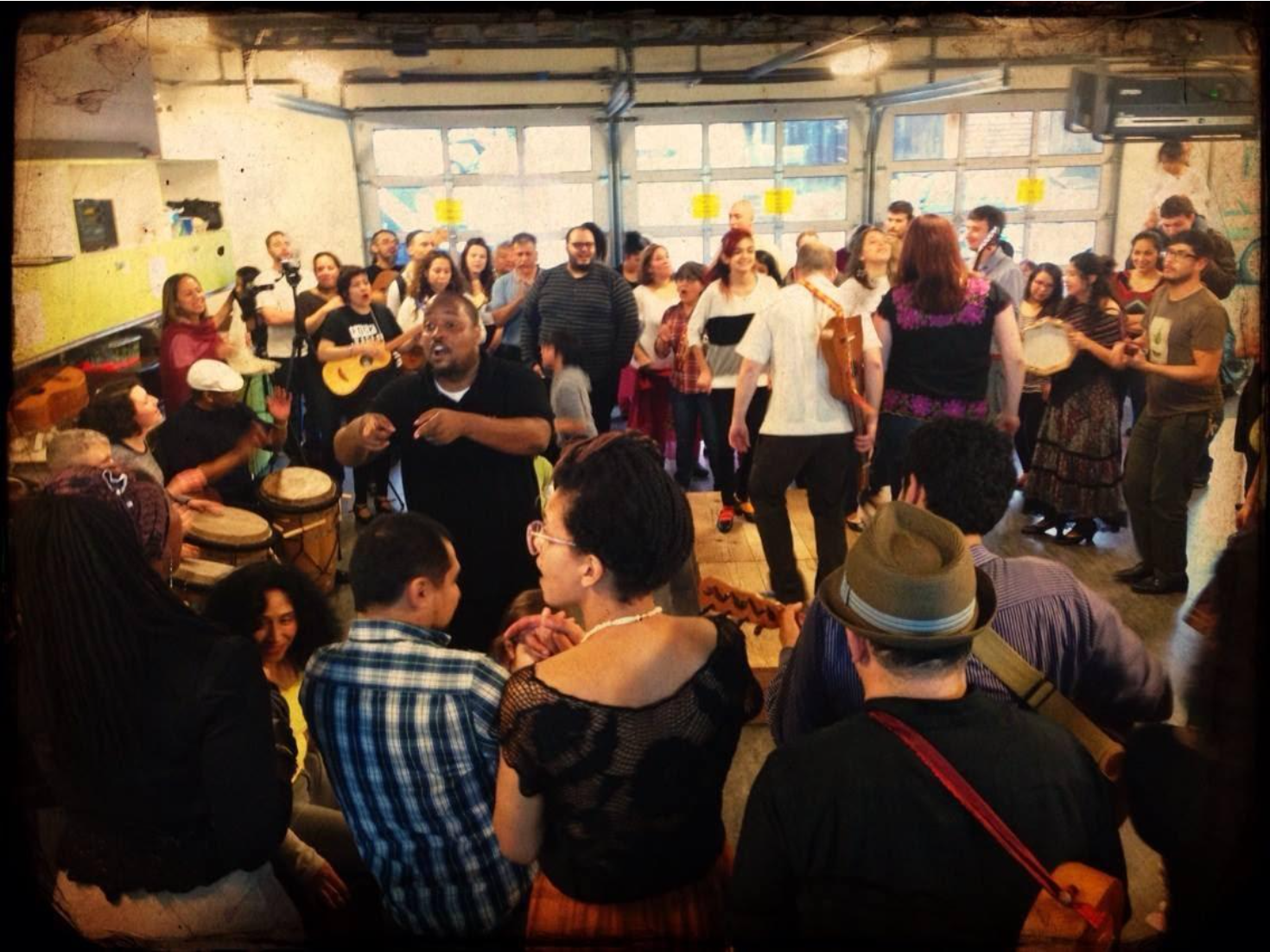 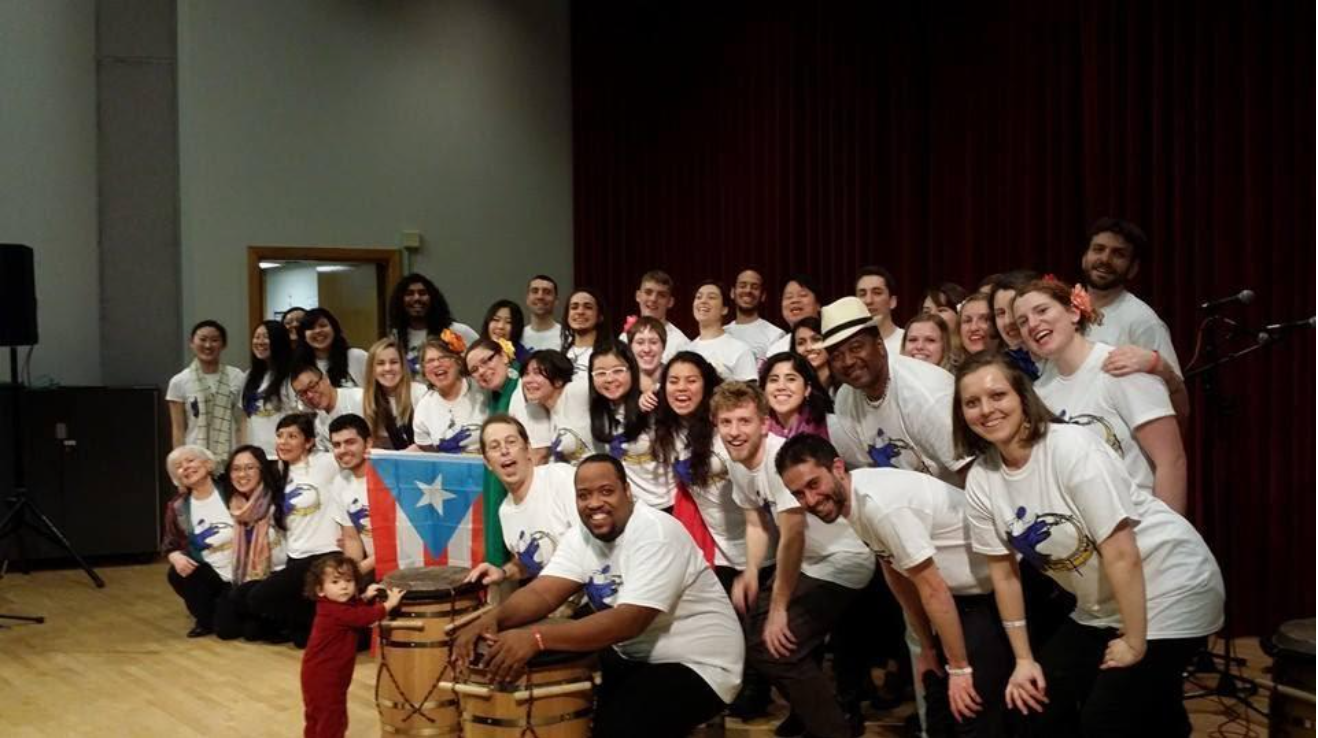 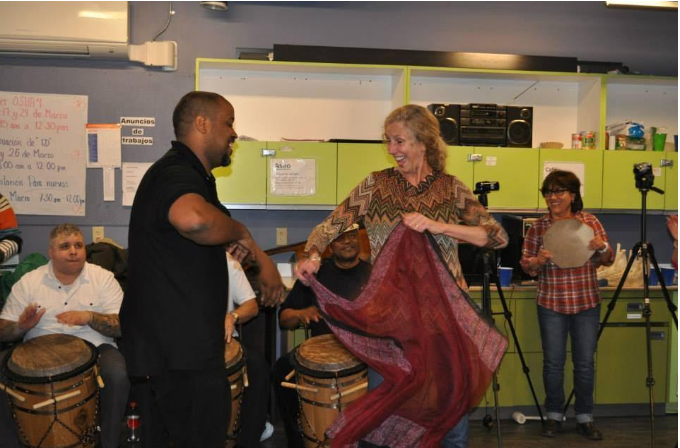 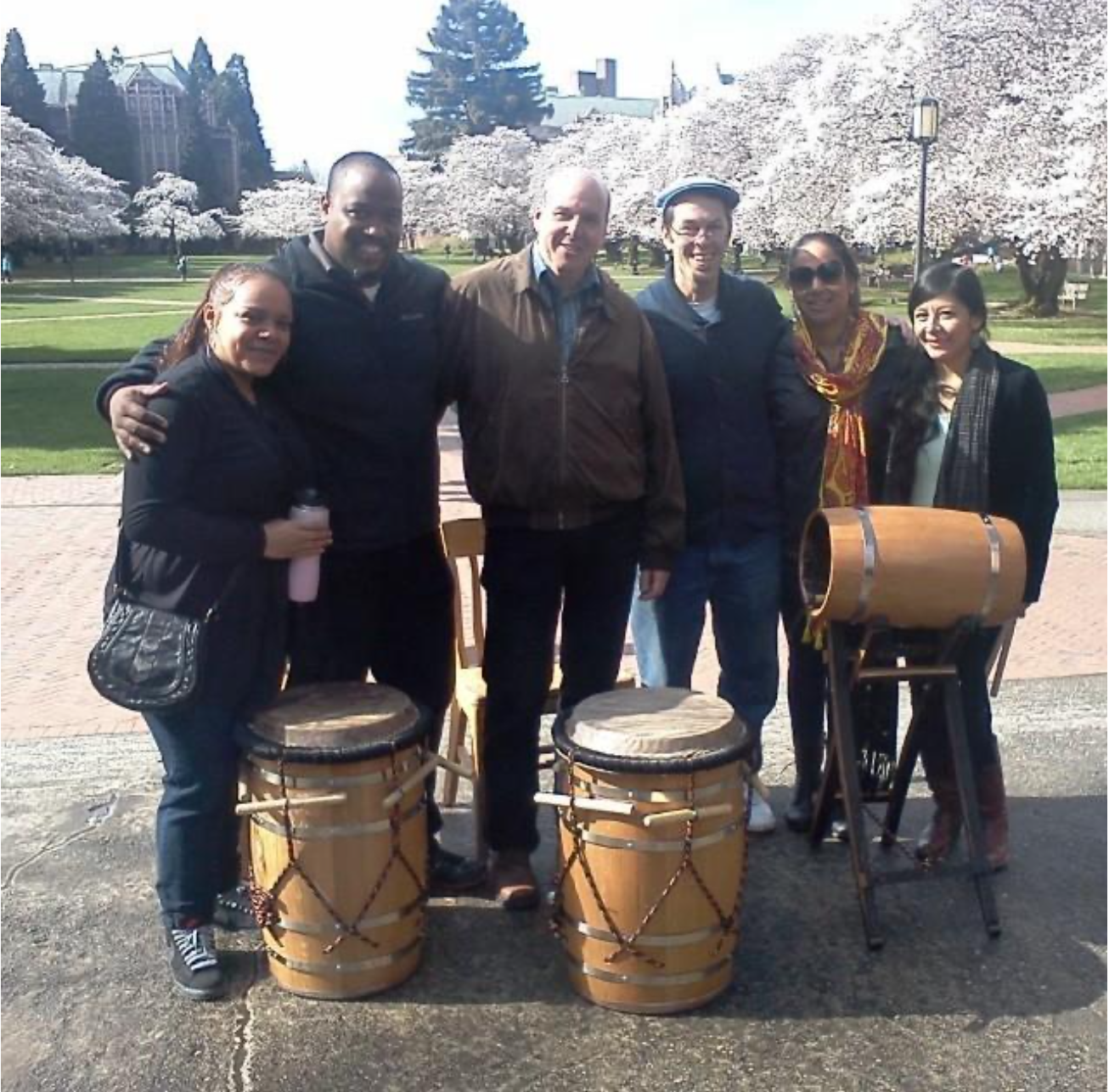 As director of the organization Restauración Cultural in Puerto Rico, Dr. Rivera teaches bomba and promotes it as a participatory community art, including work with community arts groups in other Caribbean islands. During his residency at UW Dr. Rivera attended meetings of Grupo Bayano, a Seattle-based bomba group. He also participated in meetings and events of MAS (Movimiento Afrolatino de Seattle), an Afro-Latino arts education project directed by UW Ethnomusicology graduate Dr. Monica Rojas, and funded by the City of Seattle Office of Arts and Culture. Dr. Rivera engaged in presentations or informal sharing in other venues as well, including UW Tacoma, Union Cultural Center in Seattle (a capoeira studio and community center), and Yakima.

Students also were encouraged to engage in community bomba activities. A requirement for both Dance 231 and Musap 389/589 was that students attend at least one bomba workshop or event at an off-campus venue. Some of the students attended Thursday workshops with Grupo Bayano at the Martin Luther King community center. Others attended one of two workshops that Dr. Rivera offered for the general public at MLK center and at Jaam Rek Studio, or the fandango/bomba workshop and Bombango at Casa Latina. Learning from other experienced dancers and interacting with people from local Latino and Caribbean communities added new dimensions to student learning: observing diverse dancing styles, learning different cultural approaches to teaching and performance, and experiencing the participatory social dynamic of bomba (see excerpts from student reports below).

...on the class generally:

“As an undergraduate majoring in Political Science, Latin American Studies, and minoring in Spanish, this course was definitely out of the range of things I am used to. I cannot even begin to explain how happy I was to use the opportunity and take the class because it has opened me up cultural-wise much more to not only Puerto Rico, but dance and improvisation in general.”

“I entered this class with a background as a percussionist and more specifically one who pretty much exclusively plays pre-written music with a conductor and has very little improvisation experience. Because of this background I was absolutely floored by the concept of the Primo [lead drum] creating music in real time to match the dancer and his or her moves and intensity. I find this idea astoundingly beautiful especially because I feel that with the exception of jazz there is so little opportunity for improvisation in the music that I study and there are especially few opportunities for this improvisation spanning across different art forms like dance and drumming together.”

“This experience helped to show me that Bomba, while a very old tradition, is still a growing art form .... I would just like to say that having studied and experienced Bomba from the point of view that I have has broadened my musical horizons and enriched my understanding of music from the Caribbean, specifically Puerto Rico. I am truly thankful for Pablo and his mission to bring Bomba to the world. He has made a believer out of me.”

...on participating in community workshops:

“The community events I went to demonstrated different aspects of Bomba as if the Bomba I learned in class just scratched the surface of what the real Bomba is.”

“Just by watching and paying attention to the other dancers, I was able to improve my dancing and my experience with Bomba.”

“I really loved going to a different environment to dance bomba because over the quarter, we have all become very comfortable with our class. It is stimulating to move to a different location and use what we have learned in a new place with new people surrounding us. There is so much to learn from everyone around, so by dancing with new people, I definitely learned a lot about bomba and myself as a dancer. It was not only inspiring, but also eye opening to see this part of Seattle I never knew existed and to be a part of the bomba community.”

“One of the biggest differences between this event and our class was that there were also various people from the local bomba community there. They each had their own style that was unique to them, and it was very interesting to see how different people interpret the same culture, and dance.... Overall, I learned that going to a community event in addition to our regular classes is very important in really understanding the culture, and the dance. Seeing the way everyone interacted with each other and had fun with the music made me appreciate bomba a lot more.”

...on the March 4th concert at Brechemin auditorium:

“It was not only quite different from our Bomba experience in our weekly class, but a drastically different performance experience than anything I have taken part in the music school. Everything was so relaxed and focused more on participation and creating an inviting and engaging atmosphere.”

“I absolutely loved seeing different people of different skill levels come up at the end and improvise Piquetes.... Being able to participate in a more realistic Bomba experience and being able to see and hear a few examples of extremely talented performer was an amazing way to grasp a new appreciation for all of the basics we had learned in class and see them put to use in a fascinatingly artistic and improvisatory manner.”

“After 30 minutes of audience participation we tried to end our session, but everyone in the room wanted to keep going! We started up again, and someone brought Pablo some water so he could keep the song going. By the end of the night my hands were swollen, I was sweaty, and I was smiling. Everyone had such a great time at the concert. It was a wonderful experience.”

“What I was able to experience was truly fantastic.... This is not to say that our classroom experience was not equally powerful and necessary, though it was drastically different than what I experienced in the bombazo on the night of our performance, and at the Bombango. Classroom environments encourage you to overthink everything: what you hear, where you are, what you are doing, etc. These environments in the community place the emphasis on sensory experience and feeling and as a result engage you as a participant differently.”

“Most everyone present interacted with each other both socially and musically. A web of convivencia was woven throughout-- with warm hugs, delicious food, beaming smiles, and abundant conversation in both English and Spanish.... Overall, I am immensely grateful for the opportunity to have experienced an intersection of these 2 very powerful ancestral traditions, and to feel a part of a combined movement to respectfully utilize their healing and community-building potential. I very much look forward to future opportunities to develop myself in, and celebrate, both forms.”

“The crowd was incredibly diverse in many ways. There were many nationalities representing almost all of the major Latin American countries.... There were babies that couldn’t even walk yet, young children that didn’t really know what was going on, children, teenager and young adults, working-aged persons and old people all well represented at the event.”

“The event was very spontaneous, joyful, and fun! Its orientation toward community as an intergenerational, all-day event with food and music made it a very safe space for people to try something new and participate with the tools they had.”

“My heart swelled for Pablo who was taking people into and out of the batey. This whole quarter, he has taught people how to drum, how to dance, and how to sing, and it was only then that I realized it was for this reason: community.... After my friend Anna arrived, we decided to dance as a male and female. She took the male role, and I took the female role. I used my skirt and tried my best to make rhythmic statements that were musical and beautiful and fit what I was trying to express with my dance. Again, I don’t have much dance experience, but here I was dancing!... If I could thank Pablo for anything, I would thank him for giving me that space to express myself in a way that I have never done before.”