Images of Exploration, Discovery, and Early Settlement in the Pacific Northwest: Exploration & Discovery

“In building up our collection we decided at the onset to secure as many as possible of the early maritime voyages to the Northwest coast, also the principal overland narratives involving Oregon and Washington” (Charles W. Smith, University Librarian, 1939).[3]

In the eighteenth and nineteenth centuries, maritime voyagers from Russia, Britain, France, Spain, and the eastern United States explored the Pacific Northwest coast. Published accounts of their voyages often were accompanied by illustrations which depicted the topography, people, crafts, and tools native to this region. 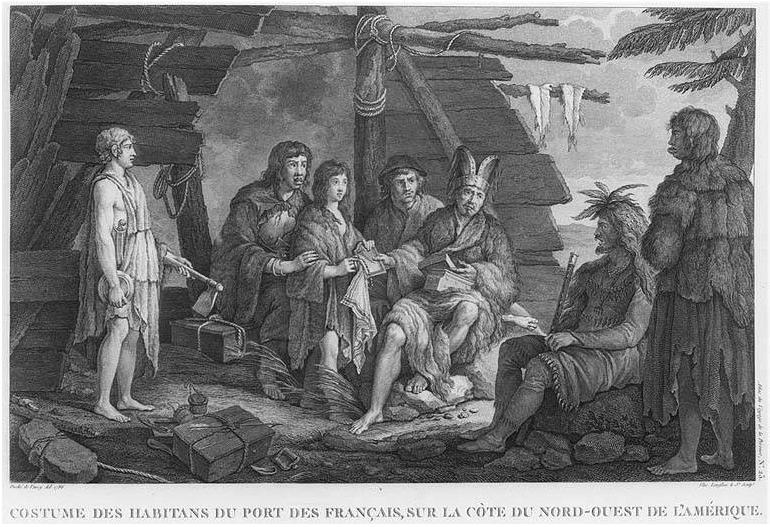 Information contained in an engraved print follow a standard form. On the bottom of plate, the name of the artist and the name of the engraver are found, with the artist's name on the left, and the engraver's on the right. The artist is identified usually by first initial and last name, followed by “del.,” which is Latin for delineavit. The engraver is usually identified in with the abbreviation “eng.,” but can also appear as Latin abbreviations of sculpsit or fecit. If an additional person assisted in creating the work, such as person who drew the figures, their name will appear also, followed by “fig.”

It is important to note that engraved prints are not an exact replica of what the artist originally drew or painted. Some visual content is lost (or added to) in the translation. John Frazier Henry (a scholar who conducted some of his research here in Special Collections), in his book Early maritime artists of the Pacific Northwest coast, 1741-1841, presents a prime example of this alteration. An original drawing by Gaspard de Vancy, the official artist accompanying La Pérouse, records a scene at the Port des Français (now known as Lituya Bay, in Alaska) in which a Native American chief is presented with gifts from the European explorer. Upon presentation of a mirror, the facial expressions recorded in the original drawing are of surprise by the chief and interested curiosity in the face of his companions. In the print of the same scene, the engraver has shifted the surprised expression into one of horror by showing the chief’s eyebrows arched and knitted together and the mouth open wider, and his companion’s expressions are likewise shifted into concern, again with the arched, knitted eyebrows and open mouths. [4] In this case, the emotional tenor of the work changed significantly. In other instances, artists or engravers would later add details to add visual interest to the illustration.

Cunningham, Susan. 1978. The Nootka Sound natives in 1778 as interpreted by members of Cook's third expedition: an index of extracts from journals available in the University of Washington Library. [Seattle: s.n.].

Henry, John Frazier. 1984. Early maritime artists of the Pacific Northwest coast, 1741-1841. Seattle: University of Washington Press. Presents general information about 26 voyages, including many of the lesser known voyages to this region, and provides biographies of fifty artists.

Howgego, Raymond John. 2003. Encyclopedia of exploration to 1800: a comprehensive reference guide to the history and literature of exploration, travel, and colonization from the earliest times to the year 1800. Potts Point, N.S.W.: Hordern House. A catalog of expeditions, voyages, and travels organized alphabetically by the traveler’s or captain’s name.

Majors, Harry M. 1969. Science and exploration on the Northwest coast of North America: 1542-1841. Seattle: Majors. This multi-volume manuscript summarizes the details of, and publications arising from, explorations.

Follow the links below to view introductions and information on individual explorers as well as artist depictions of explorations, including Special Collections' holdings for each individual or expedition:

Special Collections has an extensive collection of published exploration accounts and relevant atlases.[5] Below is a select list of first or early editions in our holdings which pertain to the entries on this website.

VANCOUVER, GEORGE. A Voyage of Discovery to the North Pacific Ocean, and Round the World... London, Printed for G. G. and J. Robinson [etc.] 1798. 3 volumes plus folio atlas.

[5] Robert Monroe (past Head of Special Collections) expanded on Charles W. Smith's description of the exploration collection when he said, “Actually, the collection’s base is broader than Smith suggested, for the assembly of a virtually complete collection of ‘early maritime voyages to the Northwest Coast’ in nearly all editions and in nearly all languages in which they were published, today provides a basis for the study of Eighteenth Century exploration of the whole Pacific Ocean area, and the consequent dissemination of geographical knowledge.” The Dictionary Catalog of the Pacific Northwest Collection of the University of Washington Libraries, Seattle, vii.