Selection from Smith and Shapiro's "To Have and To Hold" 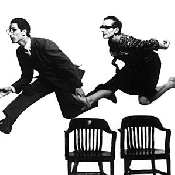 Danial Shapiro was born in New York City on January 5th, 1958. He died in Atlantic City on October 3rd, 2006. Joanie Smith continues to teach at the University of Minnesota as a faculty member of the Department of Theater Arts and Dance.

Watch Shapiro & Smith Dance's To Have and To Hold at the Media Arcade in Vol. 51 of the Chamber Dance Company Archive (DVD UWDP 001 v.51).