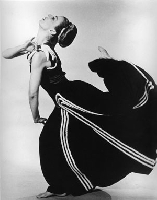 Ethel Winter was a leading dancer in the Martha Graham Dance Company from the 1940s through the 60s. In 1948 she became the first dancer to perform one of Martha Graham’s own roles in the solo, Salem Shore. Ms. Winter created roles in a number of Graham works including Helen of Troy in Clytemnestra and the vengeful Aphrodite in Phaedra, as well as in other Graham works, such as the bride in Appalachian Spring and Jocasta in Night Journey. Ms. Winter was a member of the Graham company until 1969 and appeared as a guest artist until 1973. She was also hailed as a great teacher and mentor to hundreds of students at the Graham school and Juilliard where she taught for fifty years, until 2003. Although she was not primarily interested in choreography, En Dolor, a Spanish-flavored student solo she created at nineteen, became a modern-dance classic.