"a man of poetry, of literature, of history, of politics; a man of grace and erudition"

It is unsurprising that the in 1970 Giovanni Costigan was awarded the first Distinguished Teaching Award. Rumor goes that the award was created for him. He began teaching Irish and British history at the University of Washington in 1934, and taught, with a brief hiatus during World War II when he served as an information officer in the US Air Corps, until mandatory retirement in 1975. Students would clamor to take “Dr. Costigan’s classes.” In a 1972 profile of the professor, Bruce Johansen of the Seattle Times, described the first day of classes:

A lecture hall of moderate size, full of students: on the floor, in the aisles, between the seats, along the windows. The bell rings. The one white head in the room leaves. A wake of students holding yellow computer cards swirls around behind them. These students, many of them seniors who have waited four years to take his class, want into it. The cards, with Costigan’s signature are the keys.

His national notoriety came with his famed 1971 debate with the titan of conservatism William F. Buckley. The two sparred over the Vietnam War and American foreign policy to a sold-out crowd that filled Edmundson Pavilion, out drawing the Seattle Supersonics basketball game that night. Costigan began by welcoming Buckley to “the provinces” before attacking: “His humanity never slumbers except when liberals or blacks are being persecuted or Vietnamese being destroyed by fire from the air.” Buckley characterized some of Costigan’s arguments as “crap… not even worthy of a freshman… If Mr. Costigan qualifies as an historian, I can see why he calls this the provinces.” The Seattle Times summed up the debate as one where the men “traded verbal blows that rang of the sledgehammer more than the rapier.”

Following retirement in 1975, Costigan would go on teaching via the lecture circuit. “When he reached mandatory retirement age, the UWAA joined with the History Department to seek a way for Costigan to continue teaching, and, more importantly, provide an opportunity for the community to return to campus and continue to learn.” The lecture series, with a different theme every year (Humanists in History, Modern Irish History, Evolution of Modern England, Role of the Individual in History) continued for 15 years until his death in 1990.

Giovanni Costigan lives on through the thousands of students he taught and the thousands he reached through his retirement era lecture series. For students he was the great professor. As Timothy Egan put it, “There are many tributes you can pay him. As a teacher, the best, perhaps, is this: When the bell rang, his class always ended too soon.”

He will also continue to live on via this project to digitize the Costigan lectures. 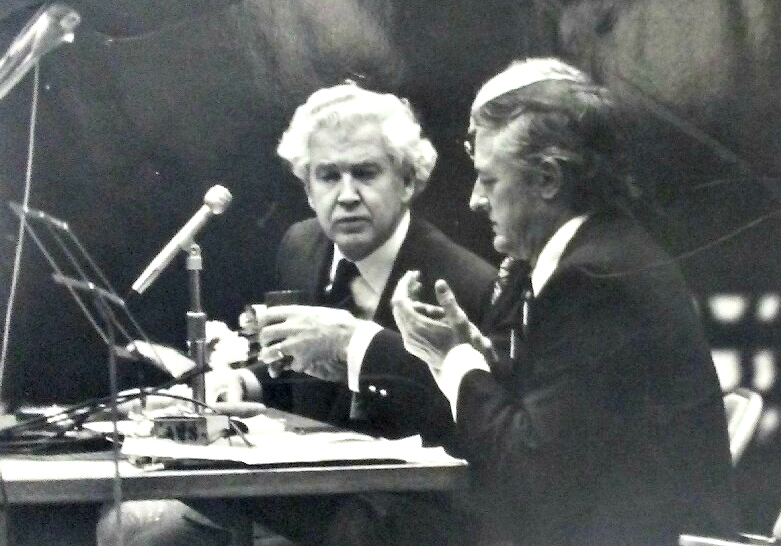 At the debate: Giovanni Costigan and William F. Buckley, 11 November 1971.