Short biographies of former directors of the Gallagher Law Library

The University of Washington School of Law Library was renamed in 1981 to honor Marian Gould Gallagher's "invaluable contributions to the University's law school and professions of law and librarianship. Her efforts on behalf of the law library have not only helped to create a great library facility but also have been instrumental in putting together one of the great law schools in the nation," according to then-Law School Dean, George Schatzki.

A portrait of Mrs. Gallagher, who worked at the library for thirty-seven years, hangs inside the entrance to the Law Library on floor L1. 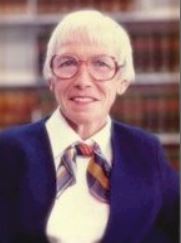 Trying to write anything about Marian Gallagher's life, especially for those who will not have the privilege of  knowing her, is like trying to carry milk across the room in a sieve--a lot is lost in the process.

Marian's seventy-five years of living stopped short in October [1989] when she suffered a heart attack, but those of us who knew her realize that her spirit and ambitions live on.

Marian Gould grew up in Burlington, Washington, until she went to college at the University of Washington, where she received her undergraduate, law, and librarianship degrees. After two years as Arthur Beardsley's assistant law librarian, Marian left to become the head law librarian at the University of Utah. Though she planned to spend only one year in Utah, she stayed five because she "had so much fun down there." Finally, one night, she recalled walking completely around a Utah reservoir, "trying to make the moon make a path on it, the way it does on Puget Sound. And it wouldn't do it." So in 1944 she came back home with her new husband, Wayne Gallagher. Her career as director of the University of Washington Law Library spanned another thirty-seven years, until her retirement in 1981.

A comprehensive review of Marian's accomplishments would take many pages, but I will try to condense them here.

On the local front, she built a wonderful library collection and gathered a staff to whom service was paramount. Her Current Index to Legal Periodicals, started as a current awareness service in 1958 for her faculty, is now sold worldwide and is available on Westlaw, in floppy disk or paper format, and can be transmitted electronically. Marian was also an active committee member in the local and state bar associations, the local AALL chapter (WestPac), and contributed her talents to the University and to library communities statewide. Mrs. Gallagher's close relationship with the local bar endeared her to many and has given the law library a fine reputation locally.

Marian's role as director of the law librarianship program through the University of Washington's library school has had a remarkable impact nationally and internationally. Educating eighty law librarians during her thirty-seven years was no easy task. But she brought charm, wit, professionalism, and practicality to her classroom. Many owe their interest and success in law librarianship to her guidance and direction. Even those who were not her formal students have been influenced by her knowledge and competence as a law librarian.

On the national front, she was an active member of the ABA Section of Legal Education and Admissions to the Bar, and worked hard to promote professionalism and fun in the American Association of Law Libraries. Marian served as President of the Association in 1954-55 and is the only person to be honored twice as the recipient of the Distinguished Service Award.

She was also Chair of the AALL Committee on Relations with Publishers and Dealers when the AALL Clearinghouse Bulletin, the CRIV Sheet predecessor, began publication. Marian served on the President's National Advisory Committee on Libraries in 1967-68 and on other presidential committees and commissions under three Presidents. She held similar appointments under several governors of the State of Washington. Her appointments to many of these library-oriented working groups were significant for at least two reasons: she was often the only law librarian appointed, and she was a woman. Because of her expertise and generosity, she enhanced the legitimacy and stature of law librarians everywhere.

In great demand as a consultant, Marian worked with thirteen law schools in one period of only five years. She served on innumerable ABA/AALS Site Inspection teams, sharing her experience and expertise with others.

If I stopped there, this sketch of her distinguished career would be a very incomplete picture of the real Marian Gallagher. You would miss what I think she regarded as the most important part: her natural inclination to find the humor in most everything.  Marian was fun at work or play. She enjoyed life and made the best out of it. Marian was a rabid Husky football fan, loved to play golf, drink, and play poker.

Marian, affectionately known as Mrs. G., was well known for her wit and charm as a speaker or mistress of ceremonies. What many do not know is that she developed stage fright at an early stage in her career and knew she had to do something about it. She joined the Toastmistress Club and was "cured." What a cure! Her natural wit and timing coupled with experience made her one of the best at her craft. In 1970-71 she gave twenty-nine speeches or addresses!

Perhaps the best tribute is to quote Marian herself. She claimed to want the following characteristics in law librarianship students:

Mrs. G. was all of this and more. I am proud to be a law librarian because of the kind of person Marian was. She represented the best we could hope to achieve. Though she is gone, she leaves a lifetime of significant contributions and happy memories.  Thank you, Marian, for sharing yourself with so many. 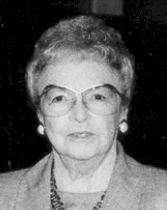 Betty Wilkins, Law Library Director at the Gallagher Law Library (University of Washington School of Law) from 1982 to 1985 and Assistant and Associate Law Librarian from 1965 to 1982, died Monday April 26, 1999 following a short illness.

Betty was one of 17 law graduates of the UW class of 1938 and was in the first graduating class of the law librarianship program, finishing in 1940. She worked in the Law Library from 1938 to 1942 when she retired to raise her family. She practiced law from 1957 to 1965.

The headline in the Seattle paper in 1939 was "15 Men and Girl Admitted to Bar." Betty is quoted as saying, "Even if you don't intend to practice law, legal training can be valuable as background."

But, Betty did practice, and she did use her legal training in her years of work in the Gallagher Law Library.

During her work at UW, Betty was head of technical services and then public services. Betty probably hired more students and staff at Gallagher than any single librarian before or since. Over her 20 years of service, she worked as editor of the "Current Comments" column in the Law Library Journal and served as editor of the Current Publications in Legal and Related Fields.

Betty was one of those quiet workers who inspired excellence and dedication in others. She cared about people and the quality of life in the law library and law school.

Betty had a lot of class. I will miss her.

Penny A. Hazelton, Professor of Law and Law Librarian