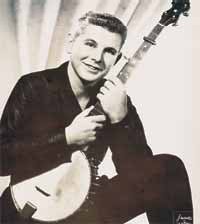 I first met Bob Gibson when he came to Seattle in 1957 for a concert with Walt Robertson at Eagleson Hall, in the "U" district. He then started coming here from Chicago often. I caught up with him again in Sausalito in 1959. He was an amazing performer, very vibrant and an audience pleaser.

He taught me a lot about performing. I remember one night when he was performing at The Anchor Steam House, in Sausalito. As I walked in, he was at the bar. I joined him for a drink and we watched the very noisy crowd. I asked him how he planned to break through the crowd noise for his next set. He said: "Watch me." He walked up on stage, picked up his banjo, and rather than starting with something loud to get the audiences attention, he very quietly started playing Bach's "Jesu, Joy of Man's Desiring." The audience froze and became silent and amazed. Within one minute, he had them in the palm of his hands.

The stories of Bob are legion. He lived a hard life and he died hard. But today he is very well remembered. See http://bobgibsonlegacy.com
(Bob Nelson, September 2012)