These are the guidelines by which materials are purchased for the Germanics collection of the UW Libraries (Seattle Campus). 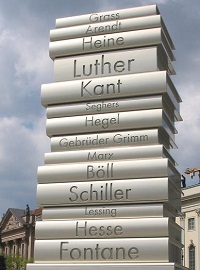 These are the guidelines by which materials are purchased for the German Studies language and literatures collections of the UW Libraries (Seattle Campus).  For questions or more information, please contact the German Studies Librarian.

German Studies as an academic discipline is concerned with German language and literature and their role in Western civilization; and with linguistic analysis of the Germanic languages.

The main areas of classification schemes that cover Germanic language and literature. Areas listed don't always reflect current collecting activity. Materials of interest could be shelved under a number of schemes (for instance, DVDs are shelved by accession number, not by classification). As always, consult the UW Libraries catalog for the specific materials you are interested in.

Dewey Decimal Classification (some monographs cataloged before 1967 and some serials, now mainly in storage locations):