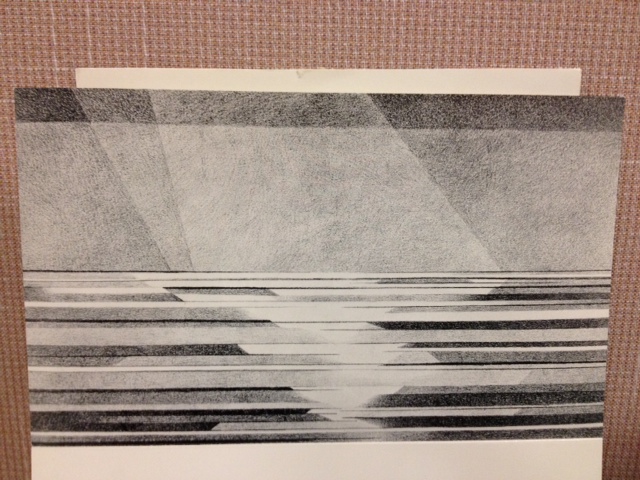 By Arlene Cohen and Nancy Blase

Critically acclaimed Seattle modern artist Maria “Marika” Frank Abrams (1924-2013) was a Hungarian-born Holocaust survivor whose work spanned five decades. An image of one of her paintings, “Untitled, 1977” (shown above), was used in a printed announcement to promote one of her gallery exhibitions and is among the many papers in the Maria Frank Abrams collection in the Washington State Jewish Archives.

The Abrams collection covers 1940 to 1977 and includes other exhibition announcements and invitations, correspondence, newspaper clippings and color slides of several of her paintings.  Her works were shown at the Seattle Art Museum, Henry Art Gallery, elsewhere in Seattle, and also in Bellevue, Portland and other locations.

The Maria Frank Abrams oral history, recorded in 1974, also is part of the Jewish Archives with topics covering her early years in Hungary, including her time in the concentration camps with descriptions of the kinds of drawings she made there. The interview also covers her art career, beginning as a University of Washington student in 1948, her working method, media, inspirations, regional art and art juries, and set design work for an opera. The oral history cassette is being converted to digital to be made available for widespread listening.

Her many admirers and supporters included artist Mark Tobey and art dealer Otto Seligman, a prominent Seattle gallery owner who has treasures of his own in the archives. 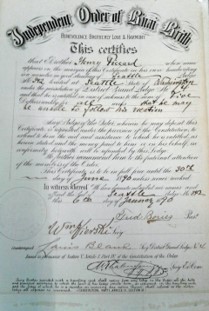 When we opened the box in the Jewish Archives in Special Collections at the University of Washington Libraries to investigate a large scrapbook, a slim folder with a single document was on top.  Examining it, I knew exactly what it was:

The Independent Order of B’nai B’rith formed in 1843 in New York City as a fraternal order by some young Jewish men partly as a reaction to exclusion from other fraternal organizations.  Mainly attracting young men, chapters known as ‘lodges’ soon formed throughout the country including the West.  In a small western town, a B’nai B’rith Lodge might be the first Jewish organization giving the Jewish men a place to belong before the organizing of a synagogue and a cemetery.

B’nai B’rith also acknowledged the mobility of its membership:

Like its non-Jewish counterparts, B’nai B’rith fit perfectly with the needs of a geographically mobile people.  Since the lodges extended over the whole country by the 1960s, a Jew moving from place to place could take his benefits package with him and find a familiar setting among “brothers” in the new town.  Indeed, the order issued traveling cards so that members could immediately join a new lodge after relocating.[ii]

The print at the bottom reads:

Every Brother with a traveling card shall receive from any lodge in the Order all the help and practical assistance to which the laws of his lodge entitle him as expressed in the traveling card and the lodge of which he is a member on receiving due notice thereof shall refund to the sister lodge any expenses incurred.

Fred Bories ran a shop featuring harnesses, saddles and bridles in downtown Seattle and also worked on an artistic mural for the city.  He was one of the early members of Temple De Hirsch and made a request of the Temple De Hirsch to use the temple for a wedding to Miss Alpha Korn in 1910.

It’s not clear if Henry Pickard used his traveling card.  He is listed on the 1901 membership list of Temple De Hirsch and also was one of the few who directly lent money to the congregation in 1908 for completion of their new building.  He lived in Seattle at the time of his death.

by Arlene Cohen and Nancy Blase

At the turn of the 20th century, the Feist and Bachrach Dry Goods Store brought fashionable fabrics and clothing to Tacoma, influencing styles worn by an entire generation of Pierce County women.

In this photograph, lovely ladies bedecked in flowers and swinging parasols sit on a horse-drawn float parading down a Tacoma street in the late 1890s. The appearance of the float in the parade is testament to the success of teh store and its owners, Theophil Feist and Joseph Bachrach.

Feist had left his native Alsace-Lorraine, France, for 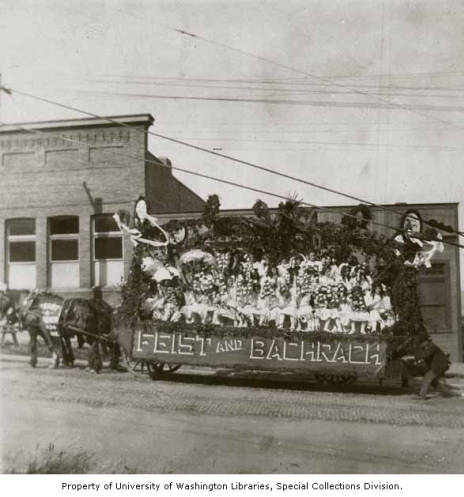 the U.S. as a young man, settling in Tacoma in 1889, just a month before his 16th birthday. Speaking French and German--but no English, he worked in clothing stores in Tacoma and by 1894, established his own store, Theophil Feist and Company.

The year after Feist arrived in Tacoma, he sent for his two sisters, Irma and Lucie, who worked as skilled milliners in France. "Merry Widow" hats and "leg o'mutton" sleeves were all the rage in Parisian fashion and the sisters soon were creating similarly smart styles for Tacoma ladies.

Bachrach had left his native Mecklenburg-Schwerin, Germany, in 1874 at age 20. He first worked in the dry goods trade in Africa, and then in various mercantile houses in the U.S. He arrived in Tacoma in 1889, married Lucie Feist in 1894, and then became a partner in his brother-in-law's store the following year.

Feist and Bachrach sustained success for several decades. In the book Tacoma: Its History and Its Builders; a Half Century of Activity, published in 1916, author Herbert Hunt writes of the business: "Today they have one of the largest stores of the kind in Tacoma."

Feist and Bachrach is just one of many historic businesses that was featured in the WSJHS exhibit, "Shalom! Open for Business: Tales of Jewish Merchants in Washington State," at Seattle's Museum of History & Industry in 2014.

The Washington State Jewish Historical Society promotes interest in and knowledge of the life, history, and culture of the Jewish people and communities of the State of Washington. The Society is dedicated to discovering, preserving, and disseminating the history of the Jews of Washington State. This unique history is shared through publications, exhibits, displays, speakers, and tours.