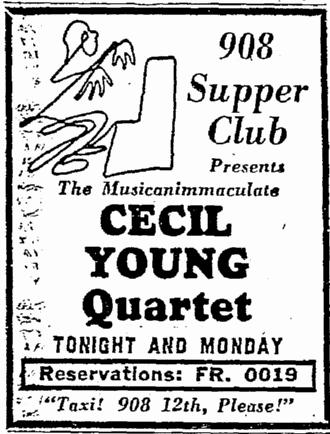 This is Burt C. Porter's personal collection of sound recordings on open reel. This collection was donated to the University of Washington Libraries in 2012. A majority of the recordings are dated in the early to mid-1950's. The collection includes recorded television and radio programming, as well as bootleg club recordings. Some of the more unique recordings include jazz artists in Seattle, Cecil Young Quartet and Ernestine Anderson.

Burt Porter, born near Spokane, WA on June 10, 1916 (Bureau of the Census, 1920), started his own business in Seattle, WA (University District) selling electronics in the late 1940’s. From notes found in his collection printed on the Burt C. Porter Co. letterhead, as well as from an audio reel of dictation, it was identified that he sold a variety of electronics, but mostly audio recording machines. His business spread from Seattle throughout the greater Pacific Northwest and into Canada. Not only was he selling to individual consumers, but he also worked on deals with larger companies, such as Boeing.

This collection contains unique Seattle jazz recordings. For more details on the collection at series level, visit the finding aid located at http://archiveswest.orbiscascade.org/ark:/80444/xv86273

All recordings will eventually be made available to researchers, for free, at the UW Libraries. This collection is a part of SSAPP, UW Libraries' commitment to collect, preserve, and provide access to musics of the Puget Sound region. If you have any questions about his collection, please contact John Vallier.