Joe Hill, originally born as Joel Hagglund in Gavle, Sweden, has been known as one of the most famous wobblies. He was an active organizer and leader for the IWW. Combining his strong belief in labor rights and love of music he became one of the famous songwriters for the IWW Little Red Songbooks, his first song being “Case Jones-the Union Scab”. Both of his parents were musically talented and he learned to play violin, his favorite instrument, playing mostly by heart. Hill left for the United States in 1902, changed his name to Joseph Hillstrom, which became popularly known as Joe Hill. In 1910, he joined the IWW in San Pedro, California. While organizing workers in Salt Lake City, Utah, he was convicted of slaying John G. Morrison, a grocer. The trial was very hostile to Joe Hill and the IWW and claims were loudly voiced by IWW supporters that the trial was unjust. When a lawyer summarized the case for Solidarity, (May 23, 1914) he said “The main thing the state has against Hill is that he is an I.W.W. and therefore sure to be guilty.” Joe Hill and thousands of supported in the United States and abroad believed him to be innocent and had nothing to do with the murder. The verdict of the trial had Hill executed by the state of Utah in 1915, shot with four dum-dum bullets. His last will was to tell people

Here is a portrait of the famous Joe Hill, IWW member, poet and martyr. Musicians, like Joan Baez have performed songs as tribute to his memory. He is known as an inspiration to activist beyond the IWW. 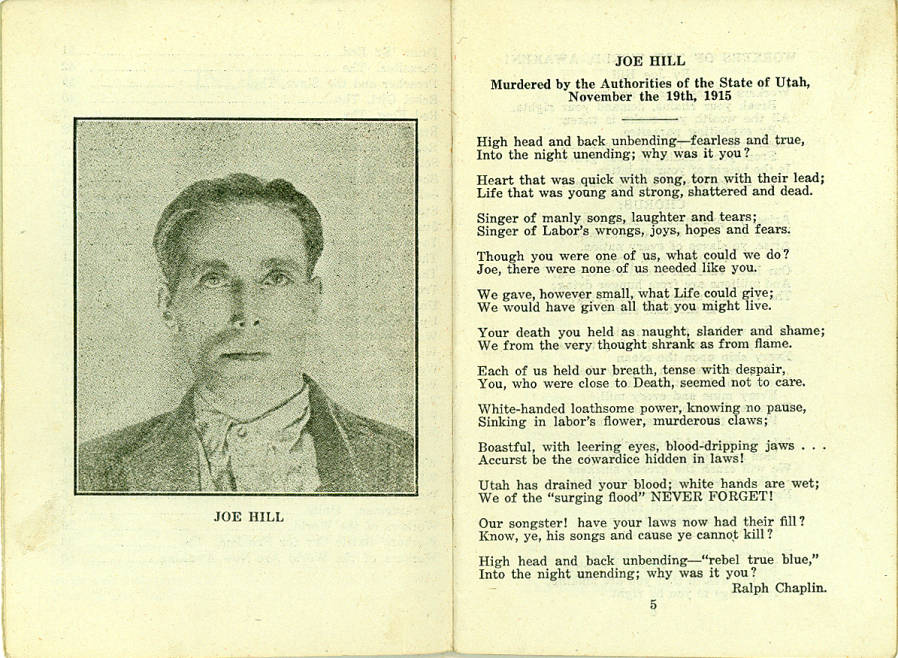 Ralph Chaplin's tribute to Joe Hill, printed in an IWW Songbook. Other tributes include the "Ballad of Joe Hill" also titled "I Swear I Saw Joe Hill Last Night"

The letters of Joe Hill

Joe Hill's letters compiled into one source. Excellent primary source for Joe Hill concerning his trial and correspondence to other IWW members, including the editor of "Solidarity".

The case of Joe Hill

Some of the IWW songs written by Joe Hill compiled on this CD with the help of other musicians. You will find songs, poems, and speeches by or about labor organizer Joe Hill.

The man who never died : the life, times, and legacy of Joe Hill, American labor icon

Abstract:Drawing on extensive new evidence, the author deconstructs the case against his subject and argues convincingly for the guilt of another man. This book does justice to Joe Hill's extraordinary life and its controversial end. (Secondary Source)

The Legend of Joe Hill

Article on Joe Hill and the way he has become a legend in labor history, even an influential character in American labor culture.

Critique of a novel written on Joe Hill that claimed to be historical when it was actually more fictional. Interesting to see how Joe Hill has inspired fictional works that tried to historicize some legends about him.