Who We Are: Muslim Americans

Islamophobic profiling saw a dramatic rise after the 9/11 attacks. Though as yet relatively under-litigated, #FlyingWhileArab and #FlyingWhileMuslim have emerged to capture the reality of navigating spaces like airports while a member of a visible minority.

Though religious attire and expression are relatively protected in the United States, headscarf bans or other restrictions on religious dress are not uncommon around the world. Even in the US, there have been some lower court cases about the right to wear a headscarf on the job even when it conflicts with uniform codes.

One of the first campaign promises President Trump followed through on was the so-called "Muslim ban." Grounded in the Immigration and Nationality Act of 1965, which permits the President to prevent the entry of any "aliens or class of aliens" that might be detrimental to the interests of the United States. In practical effect, this executive order impacted not only visitors, immigrants, and refugees but also green card holders and dual citizens. Moreover, under the new policy, citizens from Libya, Syria, Iran, Somalia, Yemen, and Sudan would be banned from entering the U.S. if they couldn't prove a "bona fide" relationship. This included parent and sibling relationships but not grandparent or nephew/niece and aunt/uncle relationships. The two executive orders implementing these policies have been the subject of a number of legal challenges from the states. 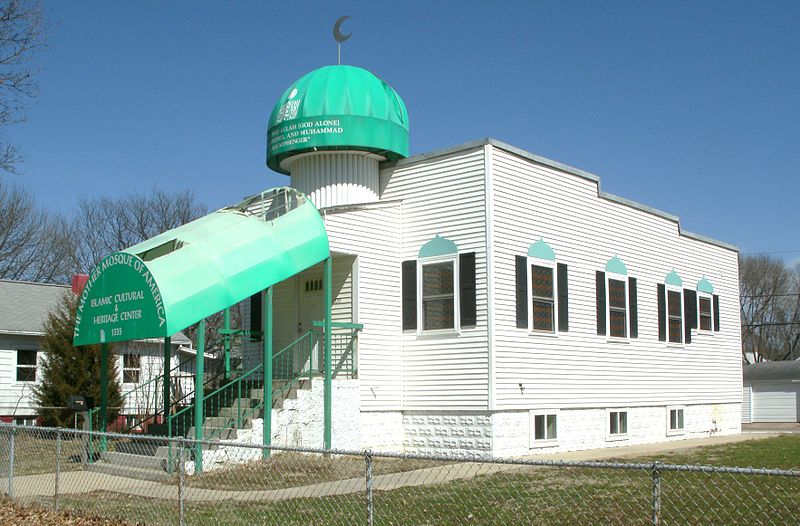 The Mother Mosque of America in Cedar Rapids, Iowa. Built in 1934, it is asserted to be the oldest standing and continuously operational mosque in the United States. It is on the national register of historic places. Find out more here.

Image by RifeIdeas [CC BY-SA 3.0 or GFDL], from Wikimedia Commons.