Who We Are: Asian Americans and Pacific Islanders

The Annexation of Hawaii

The Annexation of the Philippines

Guam, along with the Philippines and Puerto Rico, was ceded to the US in the Treaty of Paris of 1898. It is currently an unincorporated, organized territory of the United States. Guam elects one representative to the US House who can vote in committee but not on legislation and sends delegates to the major party conventions, but its citizens cannot vote in Presidential elections despite being American Citizens.

In 1997, the current iteration of the Commission on Decolonization was established. They have met intermittently over the last 20 years and continue to work with the United Nations Special Committee on Decolonization for Guamanian independence. Their efforts have included moves for a plebiscite in 2016 and funding a public information campaign on the different paths Guam could take toward greater self-determination.

American Samoa is the half of the Samoan archipelago that was claimed by the United States in the Tripartite Convention of 1899. In the present day, it is an unincorporated, unorganized territory administered by the US Department of the Interior. American Samoans are represented by a non-voting delegate to the House of Representatives and send delegates to the major party conventions, but cannot vote in Presidential elections. People born on American Samoa are American Nationals but not American Citizens. They are instead considered "non-citizen nationals" until such time as they attain citizenship by naturalization by fulfilling the residency requirement, passing a civics test, and pledging an oath of allegiance to the US.

Of the US's 11 uninhabited territories, 8 (Baker Island, Howland Island, Jarvis Island, the Johnston Atoll, the Kingman Reef, Midway Atoll, the Palmyra Atoll, and Wake Island) are located in the Pacific. Except for the Palmyra Atoll which is incorporated, all of the US Minor Outlying Islands are unincorporated and unorganized.

Starting in the late 1840s, the US saw a huge influx of Chinese immigrants, especially on the west coast. Many of these immigrants worked in mines, on the new railroads, and in fishing and canneries. Initially, they were welcomed, but factors like an economic downturn in the 1870s caused sentiment to shift. This was complicated by the fact that big business often brought in immigrant labor to break strikes and to avoid paying their workers a living wage. Several anti-Chinese riots occurred in western states and in 1882, the Chinese Exclusion Act was passed by Congress, which banned the immigration of Chinese laborers to the United States. Additional legislation in 1892 and 1904 renewed the ban, which was not lifted until 1943.

The Annexation of Hawaii

The Annexation of the Philippines

The Insular Cases, heard before the Supreme Court in the first quarter of the twentieth century, were borne out of the debate over the tax and tariff status for overseas territories and the question of whether people in those territories would be fully considered United States Citizens. The four most significant are generally considered to be Downes v. Bidwell (1901), Dorr v. United States (1904), Balzac v. Porto Rico (1922), and Rassmussen v. United States (1925).

Of the four, Downes (1901) rises among the Insular Cases as perhaps the most significant. Downes was a citrus importer based in NY and had been forced to pay import duties on oranges from PR. In DeLima v. Bidwell (1901), the court had decided that since PR had been acquired by the US normal customs levied on imports from foreign countries no longer applied, but the Foraker act had levied specific customs duties against PR. Downes submitted to the court that under Article I Section 8 of the Constitution the duties were unconstitutional. The court was stunningly divided in this 5-4 decision with five different opinions entered (one majority, with two separate concurrences, and two dissenting). In the majority decision, it was held that the newly annexed territories were not properly part of the United States. It is from this decision that the idea of an "unincorporated territory" was born. The idea is that the United States can be the proprietor of a territory without that territory being fully incorporated into the union and is distinct from corporate incorporation. Arguably, the deeply divided decision in Downes v. Bidwell represented a step back in territorial governance from the supreme court and firmly left this in the hands of Congress going forward.

Dorr (1904) and Balzac (1925) dealt with the right to trial by jury. The former dealt with the Philippines, an unincorporated territory at the time, and the latter with Puerto Rico which is unincorporated today. In both, the court ruled against the plaintiffs who claimed their Sixth Amendment rights had been violated. The Court affirmed that the constitution did not extend "ex proprio vigore" (by its own force) do territories that had not been incorporated into the union, so the plaintiffs had no Sixth Amendment rights to violate.

Rassmussen (1925) dealt with Alaska. In contrast to the Philippines, Puerto Rico, and the other Pacific Territories acquired by the United States in treaty with Spain, Alaska was acquired from Russia with intent to include the territory in the union of states. The territories acquired from Spain according to the Court were acquired for ulterior purposes. Therefore, Alaska was an incorporated territory and its inhabitants were entitled to the full protection of the constitution. 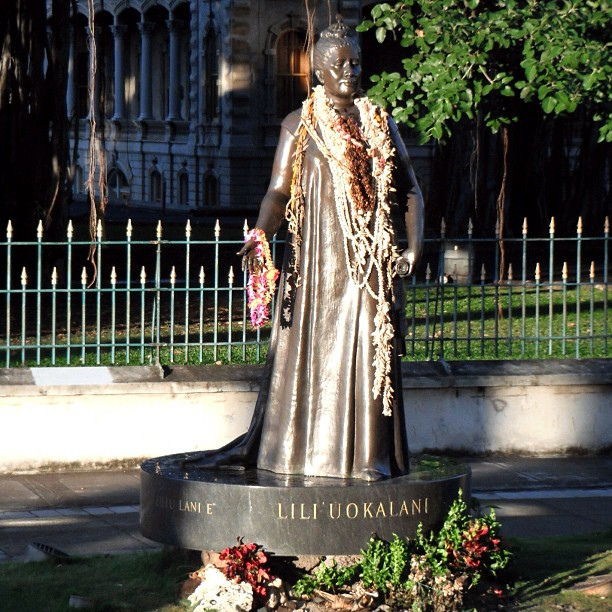 A statue of Lili'uokalani, the Last Queen of Hawai'i, at the Hawaiian State House in Honolulu.

Combining "Asian Americans and Pacific Islanders" into one identity category is not uncommon, but doing so irons over the distinctions between a vast number of people from a variety of different backgrounds. If this selection of topics interests you, here are some ways to hear more stories to start further research.