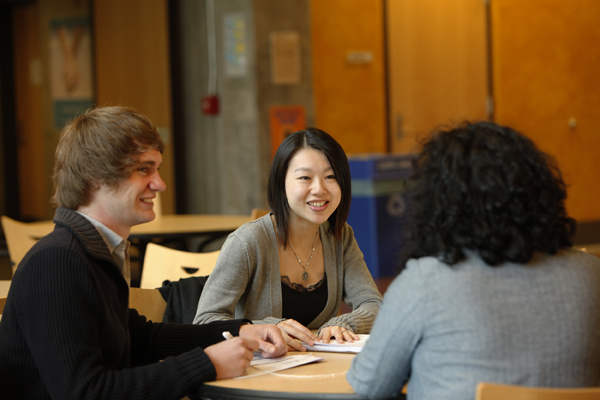 These rooms range in size and are equipped with 52" monitors to support group work and collaboration on projects for students using laptops. The monitors support HDMI, VGA, and DVI connections. These rooms also include a whiteboard, TV, VCR, and DVD player. There are no computers installed in these rooms.

There are four Media Group Study Rooms in the library. Two are on the second floor and two are on the third floor. These rooms include a whiteboard, computer (with laptop connectivity), data projector, and powered speakers. Two of these rooms (LB1-207 & LB1-214) also have phones.  Priority use is for groups of students who need to use the equipment. Equipment is supported by Information Technologies.

These small rooms near the 3rd Floor Reading Room are the only rooms that one person can reserve for individual use. They may also be used by groups.They contain a whiteboard and a wall-mounted monitor.

Rooms can be reserved for up to two hours

You can have one active reservation at a time

If a reserved room is unoccupied after 15 minutes, another group can occupy the room

To facilitate sharing of rooms, groups should not create back-to-back reservations

The online reservation system is for student use only. Faculty & staff should call or visit the library's Information Desk for questions about room reservations: (425) 352-5340.

Send us your feedback!

Text on this page created by UW Libraries is licensed under a CC BY-NC 4.0 License. Images and video are not included.
See details.