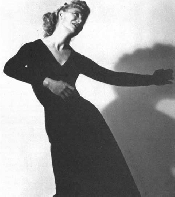 Helen Tamiris, born Helen Becker, originally trained in free movement at the Henry Street Settlement in New York. She danced with the Metropolitan Opera Ballet and the Bracale Opera Company before studying briefly with Michel Fokine and with a disciple of Isadora Duncan. In 1927, she made her premiere as a solo modern dancer and two years later formed her own school and company. Concerned with establishing modern dance as a viable art form, Tamiris was active in organizing young artists through the Concert Dancers League, Dance Repertory Theatre, Dancers Emergency Association, and American Dance Association. She also played an integral role in establishing the Federal Dance Project under the WPA. Tamiris was one of the first choreographers to use jazz and African American spirituals in her work. Many of the approximately 135 dances she choreographed between 1930 and 1945 reflected her concern for social and political inequities. Her best-known concert piece, How Long Brethren, a dance for the Federal Dance Project, depicted the despair of unemployed Southern African-Americans and was danced to Lawrence Gellert’s Negro Songs of Protest sung live by an African American chorus. Also interested in musical theater, Tamiris created dances for Annie Get Your Gun, Plain and Fancy, and Touch and Go, for which she won the Antoinette Perry Award for choreography.