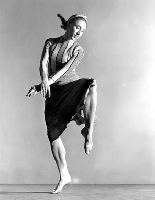 Jane Dudley was one of the most important American choreographers of the 1940s and also made a significant contribution to contemporary British dance. Born in New York, she was educated at the Walden School and the University of North Carolina. She trained with Hanya Holm at the Mary Wigman School from 1930 to 1935 and was a principal dancer with the Martha Graham Dance Company in New York from 1937 to 1944. Her roots were in German expressionist dance, and her greatest artistic period was as part of the left theatre movement that spilled over into dance, and in 1932, she became a founder of the New Dance Group, which performed in union halls and factories. Dudley's aim was to make dance accessible to a non-dance audience, and to offer material with a political orientation. She was director of the New Dance Group Studio from 1950 to 1956. In the 1960s, she taught dance at Bennington College in Vermont, and was artistic director of the Batsheva's Dance Company in Israel between 1968 and 1969. After 1970, she based herself in London for the rest of her life, leaving her mark as a singular teacher of the Graham method.