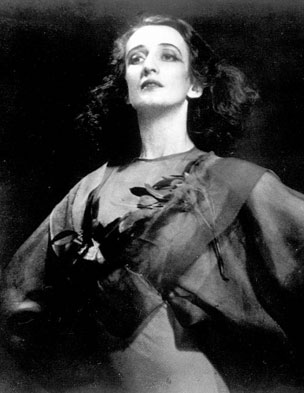 There is only one thing to dance about: the meaning of one’s personal experiences

Doris Humphrey is one of the founders of American modern dance. Humphrey’s education began at Francis Parker School, which was based on John Dewey’s principles of progressive education and experiential /experimental learning. Humphrey maintained this educational philosophy throughout her life, along with democratic principles of inquiry and individualism. Friedrich Nietzsche’s book The Birth of Tragedy also influenced Humphrey, and later Frank Lloyd Wright’s architecture left imprints on her and her choreography. She began her professional performing and choreographing career at Denishawn, and stayed there for ten years as a leading dancer and teacher. In 1928 she and fellow dancers Charles Weidman and Pauline Lawrence left Denishawn to form the Humphrey-Weidman School and Company in New York. It was here that she began to develop her own technique and became a choreographer and theorist who made important contributions to the growth of modern dance.

Unlike her mentor Ruth St. Denis, Humphrey was not driven by religious messages; she was a humanist. Many of her dances speak of man’s nobility and are an affirmation of faith in the world and humanity. Water Study, choreographed in 1928, embodies Humphrey’s elements of “fall and recovery” (the process of falling away from and returning to equilibrium), breath rhythm (phrasing and dynamics associated with breathing) and natural movement (movement derived from natural sources), which became the basis of her technique. In Two Ecstatic Themes, Humphrey poses the physical drama of rising versus sinking––the conquest of and the surrender to gravity. While promoting her company, Humphrey wrote, “My dance comes from the people who had to subdue a continent, to make a thousand paths through forest and plain, to conquer mountains and eventually to raise up towns of steel and glass.” Humphrey’s ancestors arrived in New England when it was still a wilderness, and through successive generations became religious and educational leaders. As an idealist, she came to view dance as capable of showing human perfectibility and harmony. Her performing career was cut short by arthritis, and Humphrey turned to choreography, creating the first course in it at the Dance Department of New York’s 92nd Street YMHA. Humphrey wrote The Art of Making Dances, published posthumously in 1959, and it is still used as a text for dance composition courses. Doris Humphrey will always be considered an enduring part of dance in America.