Images of Exploration, Discovery, and Early Settlement in the Pacific Northwest: Alaska-Yukon-Pacific Exposition

"...there has never been gathered together and put on exhibition anywhere in the West so fine and highly valued a collection of paintings by old and modern painters as will be shown at the Alaska-Yukon-Pacific exposition." (Dr. Alfred Raymond, Chair of the Fine Arts Committee) 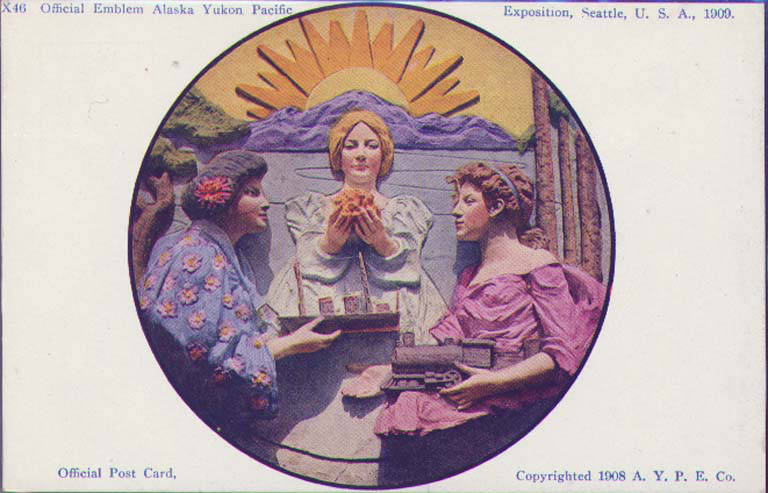 The Alaska-Yukon-Pacific Exposition (AYP), held on the University of Washington campus and instigated by the Seattle Chamber of Commerce, sought to commemorate the discovery of gold in Alaska and the Yukon Territory and to honor the importance of Asian business to Seattle.[59]

The official emblem, designed by Adelaide Hanscom Leeson (1876-1932), encapsulated the beauty, bounty, and potential of the Pacific Northwest. A guide to the AYP explained the emblem in detail: "The figure on the right under the fir tree represents the Pacific Slope, holding in her hand a train of cars, typifying Commerce by land. That on the left, shaded by the dwarf tree of Japan, represents the Orient, controlling Commerce by sea. In the center, with a background of the Northern Lights, is the figure representing Alaska, bearing a double-handful of gold nuggets, signifying the untold wealth of the North, meeting half way the commerce of the East and West, and supplying the wealth for both." [60] Interestingly, the emblem was purposefully not copyrighted but encouraged for use on all Alaska-Yukon-Pacific Exposition promotional materials (which proved to be vast).

The AYP was bursting with activities, events, and curiosities during it's four and a half month life (June 1-October 16). Visual arts were featured throughout the exposition as they were part and parcel of celebrating the heritage and economic vitality of this region. 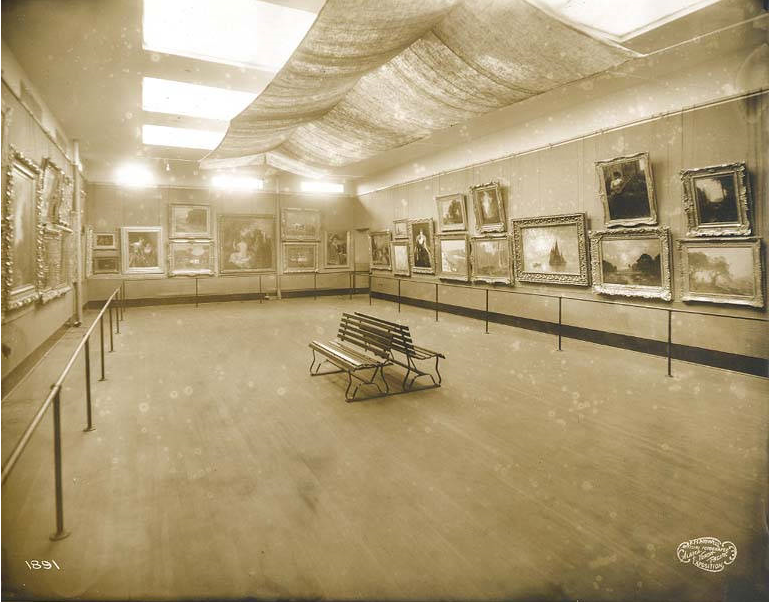 The foremost repository of art was in the Fine Arts Building (today identified on the University of Washington campus as the Architecture building). In it were 423 paintings and 32 sculptures, divided among galleries labeled AH. The Official catalogue of the Department of Fine Arts, Alaska-Yukon-Pacific Exposition, a 78-page booklet, guided visitors through the alphabetically arranged galleries. The booklet provided an introduction, information about the artwork and artist and who loaned it and if it was for sale. In back of book, one could find a list of abbreviations, an index by artist, and a finding list of those loaning pictures.

The introduction announces, "Visitors to the Galleries, appreciative of the highest art, will find the best products of the artists represented. Galleries A and B contain the most notable collection of Old Masters, early English and Barbizon men shown in any public exhibition. The remaining Galleries, containing the works of early Americans and the foremost contemporary painters, are hung as a comparative exhibition, showing sharp contrasts, rather than any attempt at grouping. The high quality of the exhibit was made possible by the interest and generosity of the Artists, Galleries, Art Museums and owners of private collections." [61] Valued at 2.5 million dollars by G.L. Berg, Director of the Committee of Fine Arts, the focus of the collection was to impresses visitors with the sophistication and quality of art. Contemporary artists comprised fewer than 200 of the artists represented. "It was not desirable to fill the building with numerous paintings by artists who are little known to the world. Only the best works obtainable were selected." [62]

The Seattle Times, in an article entitled "Fine Arts Building Filled with Treasures," from May 30, 1909, elucidates, "This display fills four galleries on the two floors of the Fine Arts Building. In the two galleries where are hung the works of the old masters, are seen paintings by Rembrandt, Rubens, Van Dyck, Corot, Millet, Murillo, and a host of others. By a system of specially constructed reflectors, the light in the galleries is perfectly diffused. The nucleus of the collection, the famous paintings already referred to, is in the two north galleries, and includes Rembrandt's Portrait of Himself, a picture so old that its face is seamed with cracks, but still perfect in drawing and wonderful in color; Millet's Peasant of Bullaing and the Flight into Egypt; van Dyck's Mother and Child; Sir Joshua Reynold's Cupid Disarmed and Archbishop of York; Ruben's Christ Delivering the Keys to Peter; Jordean's Christ Before the Doctors of Divinity; Romney's Lady Hamilton and The Widow; Leon Bonnot's Daniel and the Lions, and Daniel Myten's portrait of Charles the First from life."

Visual arts were featured in nearly all other buildings. The Woman's Building, for example, displayed over 2,000 items including embroidery, lace works, paintings, and china decoration, and included baskets and blankets made by local Native American women. [63] Works by members of the Washington State Arts and Crafts Society were displayed in the Manufacturing Building. This exhibit, prepared by the Womens Century Club, was described by a journalist from the Westerner as a "fascinating spot to visit." Artworks included "landscape, marine, and portrait painting in oils and watercolors; miniatures; artistic photography, including Thorsons well-known Indians; exquisite jewel work with settings, designed and executed by Mrs. Elliott; sculpture from Finn Froelich and Mrs. Hatch; and from the Boston Block colony of artists a wealth of work in metals, wood, ceramics, leathers, oils and watercolors..."[64]

What was called the Art and Photography Exhibit actually displayed only photographs, since the art component was already covered elsewhere. The Smithsonian Institution and National Museum (housed in the United States Government Exhibit Building), and the Department of State also had exhibits which displayed more than 190 "portraits of eminent persons connected with the discovery and history of America, Alaska, the Hawaiian and Philippine Islands (colored photographs, engravings, etchings)," and "pictures and paintings representing historic scenes and landmarks." [65] Inside the California building was a Fine Arts Gallery and Exhibit of Arts and Crafts, and the Alaska building featured 15 watercolors by Mrs. Dietrich Carl Abrams of Ketchikan, Alaska, as well as arts and crafts of schoolchildren from Ketchikan. Other buildings featured Italian and French sculptures and paintings.

Public art, in the form of sculptures on the grounds provides other artistic landmarks of the exposition. One was the statue of George Washington sculpted by Lorado Taft. Costing more than $13,000, a large portion of the funding came from the Daughters of the American Revolution, the Sons of the American Revolution, and school children from Washington State (whose donations were limited to no more than 5 cents). The statue was unveiled on June 14, Flag Day. Another notable sculpture, unveiled on Minnesota Day, was the bust of James J. Hill by Finn H. Froelich. Sponsored by the Minnesota Club, the sculpture was a tribute to the builder of the Great Northwestern Railway.[66]

The mass of visual art exhibited at the Exposition had an incalculable effect on the Seattle art community. One major consequence was the purchase of George T. Emmons Native American (mostly Tlingit) artifact collection by the University of Washington Regents. The Regents had persuaded Emmons to display his collection at the Exposition (which was shown in the California State Building) and successfully secured it for the Washington State Museum, now known as the Thomas Burke Memorial Washington State Museum. [67] Another effect was to spur personal art collectors. One in particular, Alfred Raymond, who was the Chair of the Fine Arts Gallery, purchased two paintings that were displayed, both by Chauncey Foster Ryder.[68]

Alaska-Pacific-Yukon Exposition Scrapbooks. Approximately 40 scrapbooks composed of newspaper clippings from local or out-of-town sources. Identified by scrapbook number followed by SP (Seattle Papers) or OP (Out of town papers). Specific references to articles can be found by looking through the Regional Index under Alaska-Yukon-Pacific Exposition.

Special Collections holds numerous books and cataloged pamphlets relating to the Alaska-Yukon-Pacific Exposition. Some examples of these include:

Authorized Birds Eye View of the Alaska-Yukon-Pacific Exposition, also presented in Cities from a Bird's-Eye-View, is a stunning example of promotional art. Created by William Caughey and lithographed by Schmidt Lithography Company, this view captures the natural and human-made attractions of the AYP grounds in full color with Mount Rainier rising in the southeast. (AYP462)

The largest collection of Alaska-Yukon-Pacific Exposition postcards can be found in Photograph Collection number 0777. This collection contains postcards produced by various companies, including; Portland Postcard Company, Reid, Hopf Brothers, among others. The majority of the postcards were made from photographs by Frank Nowell. A selection of these postcards (and related AYP images) can be viewed online through Alaska-Yukon-Pacific Exposition Photographs.