“I should like the country to know how much we have spent for printing pictures of bugs, reptiles, etc., that these exploring expeditions have brought here…The thing is all wrong, Sir.” [29]

The United States Exploring Expedition—also known as the Wilkes Expedition after its leader, Charles Wilkes—was the first oceanic exploration funded by the United States government. The expedition set sail in 1838 and in 1841 was on the Northwest Coast. Outfitted in the ships Vincennes, Peacock, Porpoise, and Relief, and the boats Sea Gull and Flying Fish, only Vinceness and Porpoise were able to complete the voyage. Notably, this expedition was the first to confirm the existence of Antarctica as a continent.

Unlike the high public regard Cook and La Pérouse enjoyed, or the solid respect and recognition garnered by Vancouver, Kotzebue and Litke; Wilkes was meet upon his return by indifference and disparagement. Possessing an angry and difficult temperament, he was disliked by his crew (even facing court martial for his mistreatment of them), and appropriated some of their writings into his own five-volume publication, claiming himself as sole author. 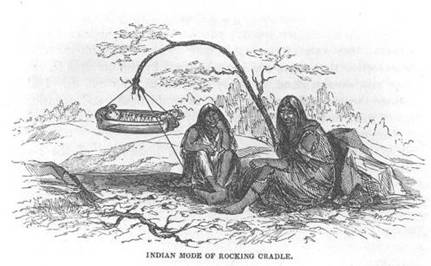 The original and official (by authority of Congress) publication of the Narrative of the United States Exploring Expedition, During the Years 1838, 1839, 1840, 1841, 1842, was assembled by Charles Wilkes (though he took full credit as author and copyrighted the work under his own name), and issued in five volumes with illustrations and maps, and an atlas. It was printed in Philadelphia by C. Sherman in 1844, and only 100 copies were produced.

Illustrations relating to the Pacific Northwest can be found in volumes four and five. At the beginning of each volume is a list of illustrations, organized by medium: engraved prints, vignettes, and woodcuts. Engraved prints are on a separate sheet and are interspersed throughout the volumes, while the smaller vignettes and woodcuts appear within the text. Volume 4 includes illustrations of Native American life including “Indian Mode of Rocking Cradle,” dress, habitations, canoes, fishing huts, tomb of a chief (Concomely), and portrait of a chief (Tatouche). Also included are depictions of Fort Vancouver, Mount Rainier, and the “Wreck of the Peacock.”

One interesting ethnographical observation is rendered in Agate’s “Indian Mode of Rocking Cradle,” engraved by T.H. Mumford. As reported by Wilkes from Port Discovery, Oregon, the “Clalum” tribe’s  “children seem to give them but little trouble; in their infancy they are tied to a piece of bark, which is hung to a tree or pole, where it is kept in motion by a string fastened to the toe of the mother, as is represented in the wood-cut at the end of the chapter.” [31] 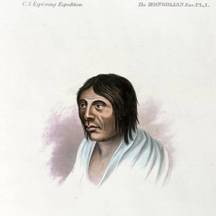 Volume five includes a view of Astoria by A. T. Agate, engraved by Rawdon, Wright, and Hatch. Also included are renderings of masks, pipes, and hats of the Pacific Northwest. Drayton’s illustration of a pine forest in Oregon, engraved by W. E. Tucker, is also included in this volume.

Beyond the scope of five initial volumes, there were actually 24 volumes planned, covering topics such as ethnography, mammalogy and ornithology, geology, botany, etc. Several volumes were never published (18, 21, 22, and 24). Of those that were published, some were official (by authority of Congress), and some were unofficial. These volumes contain some illustrations relating to the Pacific Northwest. For example, the frontispiece in Pickering’s volume (number 9), The Races of Man; and their Geographical Distribution, features “A Kalapuya Man. A native of Oregon,” drawn by A. T. Agate, and engraved by W.H. Dougal.

Alfred T. Agate (1812-1846), born in New York, executed most of the drawings in the expedition report. Soon after the end of the voyage he died, at age 33, in Washington D.C. A collection of his drawings and engravings are held in the Naval Historical Center. Information about Agate can also be found in the Franz R. and Kathryn M. Stenzel Research Files on Western American Art in the Yale Collection of Western Americana, Beinecke Rare Book and Manuscript Library.

Joseph Drayton, another of the expedition artists, also superintended the drawings for publication. “He has charge of all the copper plates, which he inspects before they are received, as he does the engravings taken from them. He is also charged with the coloring of all the illustrations, superintends the printing and binding of the books, and even the making of the paper on which the works, engravings, and charts are printed.”[32] Before embarking on the expedition, Drayton was an engraver and print colorist in Philadelphia around the years 1819 to 1838. Drayton died in 1856.

Because of the limited number (100) of the original 1844 publication of Wilkes’ five volumes, the narrative was published again in Philadelphia, and it is this 1845 edition, along with later editions printed elsewhere, that Special Collections houses.

Also in the holdings are books about J.N. Reynolds, a relentless advocate for the United States to carry out its own voyage of exploration. Reynolds was a believer in John Cleves Symmes Jr.’s 1818 theory that the earth was hollow and inner earth (accessible through the North and South poles) was inhabitable within, which fueled his petitions to the United States to explore the Poles.