Images of Exploration, Discovery, and Early Settlement in the Pacific Northwest: James Cook

“Whereas we have engaged Mr. John Webber Draughtsman and Landskip Painter to proceed in His Majesty’s Sloop under your Command on her present intended Voyage, in order to make Drawings and Paintings of such places in their Countries you may touch at in the course of the said Voyage as may be proper to give a more perfect Idea thereof than can be formed by written descriptions only…”[6] 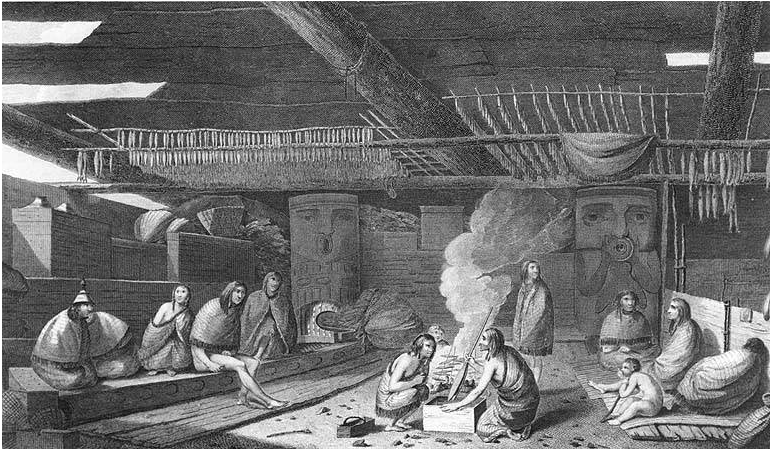 James Cook’s third voyage—to North America, Hawaii, and other places in the Pacific—in the ships Resolution and Discovery, was intended to explore the coasts along the north Pacific Ocean, and to determine the possibility of a Northwest Passage.

Circumnavigator of the globe and a revered hero to the people of England, Cook was killed on February 14, 1779, in an altercation with natives on the island of Hawaii. Command of the expedition passed to Charles Clerke, and upon his death of consumption off the coast of Russia, John Gore and James King assumed control.

The official account of the voyage, A voyage to the Pacific ocean, in three volumes together with an atlas of plates, was issued in early June 1784 by the “Order of the Lords Commissioners of the Admiralty” in London, and printed by W. and A. Strahan for G. Nicol, & T. Cadell. The accompanying atlas did not have a title page and contained 61 uncolored illustrative plates, a large folding map of the world detailing the routes of Cook's three voyages, and a chart of the Northwest Coast.

The publication of Cook’s third voyage was unprecedented in the amount of money spent on illustrations to accompany an expedition text. “No luxury was spared, and each plate was to be printed ‘on a half Sheet all of the same size.’” This expense was, in [Sir Joseph] Bank’s words, to “contribute much to the ornament of the work and as our plates are far better engravd than preceeding ones…the publick have a right to that indulgence.’” [7]

This emphasis on quality art and engravings set the bar for subsequent publications of discovery. In particular, Milet-Mureau, publisher of La Pérouse’s expedition, cited the number, grandeur, and beauty of the engravings, and the atlas with its grand format, to justify the expense of the La Pérouse illustrations. [8]

John Webber (1751-1793), an Englishman of Swiss heritage, was the official expedition artist on Captain Cook’s third voyage. Webber received his art training in Bern with Johann Aberli, and then at the Académie Royale in Paris. Returning to London, he exhibited at the Royal Academy in 1776, where his work was seen by Daniel Solander, a naturalist who had sailed with Cook on his first voyage. It was Solander who recommended the appointment of Webber as official expedition artist.[9]

Upon return from the voyage, Webber was responsible for reducing his drawings and paintings to scale for engravers. The Admiralty also hired him as "art director" for the 1784 publication, the duties of which included supervising the engravers and the printing of the plates.

After the printing was completed, Webber exhibited drawings and paintings based on the voyage in the Royal Academy in London, where he was appointed a full member in 1791. A lifelong bachelor, he traveled extensively in Europe until his death on April 29th, 1793.

Special Collections holds the first and subsequent publications of Captain James Cook’s third voyage (including accompanying atlases), in English, as well as other language editions. These can be found in the UW Libraries Catalog by searching for “Cook, James, 1728-1779” as author, Dewey call number 979.511C, and by Library of Congress (LC) call numbers G420.C65 to G420.C69. One hint: when looking at the bibliographic record, type in “atlas” in the field for “View additional copies or search for a specific volume/copy.”

Because of the very fragile nature of the atlases, it may be helpful to first consult the outstanding reproductions in The art of Captain Cook's voyages, a comprehensive three-volume publication detailing the art of Capt. Cook’s voyages (see volume 3 for the voyage to the Pacific Northwest coast). Another source of adequate reproductions is Pacific images : views from Captain Cook's third voyage by Eleanor C. Nordyke.

In recording an event during the August 1778 voyage into the Arctic, Webber vividly depicts the scene of walruses lying on ice floes being shot at by men in boats, while the two ships, Resolution and Discovery, hover in the distance. Captain Cook recorded in his journal: “On the ice lay a prodigious number of sea-horses; and, as we were in want of fresh provisions, the boats from each ship were sent to get some.”[10]

At that time, little was known about the walrus. Cook commented in his journal, “…but I have no where seen a good drawing of one. Why they should be called sea-horses, is hard to say…In short, it is an animal like a seal; but incomparably larger.”[11] Webber, perhaps at by Cook's directive, took care to depict the walrus in different positions: frontally, the side, the rear, and the underside.

This drawing is exemplary of Webber’s artistic training, his talent, and his responsiveness to the demands of recording events in visual form.  In the drawing, one sees the fusion of topography and narrative, which is characteristic of 18th Century European history painting. Webber created several drawings of this scene, changing the proportions of the walruses in relation to the men. The version in Special Collections is one of his most dramatic: massive walruses dwarf the size of the men to heighten the sense of peril.

"Shooting Sea Horses" corresponds to plate 52 in the atlas, engraved by Edmund Scott with figures by J. Heath.

This work is divided into two parts showing separately two Aleuts kayaking in the Bering Sea. In the upper half, the man depicted is a native of Unalaska, with a skin-hoop tightened up to his clothing. In the lower half is a man from Cape Newenham.

The man from Unalaska corresponds to plate 50 in the atlas, which was engraved by William Angus.

Because this artwork is fragile, you may want to first examine the excellent reproductions in The art of Captain Cook's voyages.

[6] J. C. Beaglehole, ed., The Journals of Captain James Cook on His Voyages of Discovery, vol. 3, part 2 (Cambridge: Published for the Hakluyt Society at the University Press, 1967), 1507. Letter from the Admiralty to Cook, dated 24th of June 1776.
[7] Rüdiger Joppien, 1946 and Bernard Smith, The Art of Captain Cook's Voyages, vol. 3: The voyage of the Resolution and Discovery 1776-1780 (New Haven: Published for the Paul Mellon Centre for Studies in British Art by Yale University Press, 1988), 162 in volume 3, part 2. The quote from Sir Joseph Banks, advocate and organizer of publishing Cook’s expedition account, to a Parisian bookseller. See footnote 13 in Joppien volume above.
[8] Ibid., 169 in vol. 3, part 2. See footnote 98 in Joppien for original French excerpt, or see Jean-François de Galaup La Pérouse, comte de, 1741-1788, Voyage De La Pérouse Autour Du Monde, Publié Conformément Au Décret Du 22 Avril 1797, Et Rédige Par M.L.A. Milet-Mureau (Paris: Imprimerie de la République, an V., 1797), volume 1, xv-xvi.
[9] John Robson, The Captain Cook Encyclopedia (London: Chatham Publishing, 2004), 240 under entry “Webber, John”.
[10] James Cook, 1728-1779, A Voyage to the Pacific Ocean. Undertaken, by the Command of His Majesty, for Making Discoveries in the Northern Hemisphere, to Determine the Position and Extent of the West Side of North America; Its Distance from Asia; and the Practicability of a Northern Passage to Europe. Performed under the Direction of Captains Cook, Clerke, and Gore, in His Majesty's Ships the Resolution and Discovery, in the Years 1776, 1777, 1778, 1779, and 1780. Vol I and II Written by Captain James Cook, F.R.S. Vol. III by Captain James King, L.L.D. And F.R.S. Illustrated with Maps and Charts, from the Original Drawings Made by Lieut. Henry Roberts...With a Great Variety of Portraits...Views...And Historical Representations..Drawn by Mr. Webber...Published by Order of the Lords Commissioners of the Admiralty. 3 plus folio vols. (London: Printed by W. and A. Strahan, for G. Nicol, & T. Cadell, 1784), volume 2, p. 456. Entry 19th August 1778.
[11]Ibid., volume 2, p. 458. Entry 19th August 1778.