"For nineteenth-century artists, folios and books were important means of presenting their work and making a living. News of Indians and western characters (such as mountain men and explorers) and the geography and the science (biology, ethnology, botany and geology) of the West were all ripe subjects for artists, journalists, and publishers. Special publications and portfolios of images on the subject were well received." [33]

The continuing investigation of the Pacific Northwest by artists, some of who settled here as pioneers, lent itself to another body of art relating to this region. Traveling overland in the footsteps of American explorers Lewis and Clark (1804-1806)[34], artists were spurred west by diverse reasons: participation in the Mexico-California War (1846), the first California Gold discovery (1848), military dictates (either to settle land disputes or to investigate possible railroad routes), or to record the physiognomy and dress of what was believed to be a vanishing race, the Native Americans. Artists were not always draftspeople under a captain, but were often instigators of adventure in their own right. 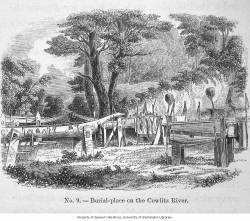 Subject matter in many ways did not differ from that of Exploration & Discovery. Artists still portrayed the exotic: Native Americans and their lives and the green lushness of the Pacific Coast. Their overland travels took them through the interior of the Pacific Northwest to Palouse Falls (depicted by Kane, Warre, and Mix), the Hudson’s Bay Company outpost in Walla Walla, and Kettle Falls. The depiction of settlements was an important subject, particularly Fort Vancouver, which was the   center of the Hudson’s Bay Company’s west coast operations and was depicted in US Exploring Expedition volumes, as well as by Henry J. Warre, James Madison Alden, George Gibbs and others. And, like the artists before them in Exploration &   Discovery, financial reward and fame originated from publication of their work as illustrations of the printed word.

In this era we encounter a constellation of artists who knew of one another and were sometimes friends. Artistic inspiration was not limited to predecessors (this still is important, the frontispiece to James Swan’s The Northwest Territory is a drawing by John Sykes), but also came from contemporaries. With groups of artists working on the same subject of the West, rivalries abounded and comparisons were inevitably made. "Reference points for the assessment of [Paul] Kane’s contribution and stature were provided by a study of George Catlin, John Mix Stanley, Henry J. Warre and other painters of Indians and western scenery at the time. One of the most significant discoveries was that of a documented link between Kane and Catlin and various references to his knowledge of Stanley’s activities as a painter in Oregon."[35]

James Swan and Sarah Cheney Willoughby were friends and lived in same town of Port Townsend. They also portrayed similar subjects: natural surroundings and the Native American population. Both Swan and Willoughby, like other artists in Overland Expeditions & Early Pioneers, were astute observers. Captured in literary and artistic form, these observations have much in common with the disciplined looking and reporting evident in the earlier accounts by commanders and their artists in Exploration & Discovery. Instead of being visitors, however, Swan and Willoughby were here to stay.

[33] Gary Allen Hood, After Lewis & Clark : The Forces of Change, 1806-1871 (Tulsa, Okla. : Gilcrease Museum, 2006), 42.
[34] The Lewis and Clark Expedition (1804-1806) did not have an artist.
[35] Paul Kane, Paul Kane's Frontier; Including Wanderings of an Artist among the Indians of North America, by Paul Kane. Edited with a Biographical Introd. And a Catalogue Raisonne by J. Russell Harper (Austin: Published for the Amon Carter Museum, Fort Worth, and the National Gallery of Canada by the University of Texas Press, 1971), xi.

Dippie, Brian W. 1990. Catlin and his contemporaries: the politics of patronage. Lincoln: University of Nebraska Press.

Although Dippie is certain of Catlin’s superiority to his contemporaries, he nonetheless includes a generous amount of information about Kane and Stanley, as well as other artists depicting Native American life. This book also includes a Bibliographical Note, which provides the location of original sources.

Written to accompany a 2006 exhibit at the Gilcrease Museum in Tulsa, Oklahoma, Hood writes in broad brushstrokes about nineteenth-century art in the West, particularly about the Gilcrease’s holdings that portray Native Americans and scenes from life. The essay is well-written, enjoyable to read, and discusses artists like Warre, Kane, and Stanley who came to the Pacific Northwest.

McDonald, a local historian, was one of the first to recognize Swan’s historical importance to the Pacific Northwest. This book also gives specific examples of the friendship between Swan and Willoughby.

A convenient reference tool for obtaining biographical information about artists and location of their artwork.

Schoolcraft, Henry Rowe, and Seth Eastman. 1851. Historical and statistical information respecting the history, condition, and prospects of the Indian tribes of the United States; collected and prepared under the direction of the Bureau of Indian Affairs per act of Congress of March 3rd, 1847. Philadelphia: Lippincott, Grambo.

Follow the links below to view introductions and information on these pioneers and artists, including Special Collections' holdings for each individual or expedition:

Special Collections holds a number of accounts and artwork relating to overland expeditions and early pioneers. Below are the major works that pertain to the highlighted artists featured on this website.

KANE, PAUL. Wanderings of an artist among the Indians of North America, from Canada to Vancouver's Island and Oregon, through the Hudson's Bay company's territory and back again. London, Longman, Brown, Green, Longmans, and Roberts, 1859.

U.S. WAR DEPARTMENT. Reports of explorations and surveys, to ascertain the most practicable and economical route for a railroad from the Mississippi River to the Pacific Ocean. Washington, A.O.P. Nicholson, Printer [etc.] 1855-61. 12 volumes. See volume 12, part 1 for John Mix Stanley's work.

SWAN, JAMES GILCHRIST. The northwest coast; or, Three years' residence in Washington territory. New York, Harper & brothers, 1857. The papers of James Swan and other books he authored and illustrated can be found by searching under his name, as author, in the UW Libraries Catalog.

WILLOUGHBY, SARAH CHENEY. Willoughby's artworks can be seen in person, at Special Collections, or can be viewed online, at Digital Collections by searching under, "Willoughby, Sarah."