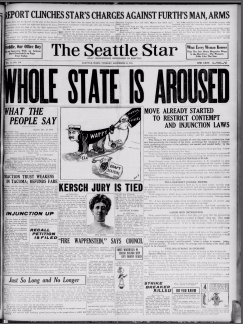 Newspapers and news magazines were extremely influential during this time period, playing roles in local and national political and social issues.  Anthony Fellow explains: "New York had no fewer than 15 dailies and more than twice as many weeklies, but even a town as small as Emporia, Kansas, had two dailies."  In the 1920s, Time magazine and radio emerged as major news sources.