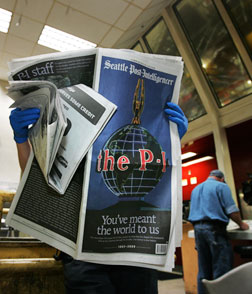 The rise of online news has caused a dramatic decline in print newspapers - readership and availability.  Philip Meyer writes that "Weekday circulation of newspapers in the USA fell in 2007 to 50.7 million, its lowest point since 1945....And the number of daily newspapers continued to fall at a steady rate: an average net loss of twelve mastheads per year since 1971."  Newspapers have tried a variety of cost-saving strategies including stopping home delivery, decreasing the number of days published, publishing only online editions (such as the Seattle Post-Intelligencer), and others have ceased.

Search for articles about your topic published in newspapers around the world using these databases: