Take Me There: Maps and Books from Old Japan: 04

This world map, originally produced in 1802 was compiled by Ishizuka who was appointed as a lord of the Satsuma Domain by Shimazu Shigehide [1745-1833]. Shimazu encouraged scholars to learn Rangaku (Western science and humanities). This was one of the publishing projects instituted by Shimazu. The map in our collection was copied by hand, but the transcription date is unknown. This map was originally a combination of two works: “Tenmonzu ryakusetsu” and “Chikai zenzu shūsetsu”. Therefore, not only the map itself, but also astronomical information is included on this map.
Under the policy of seclusion, publication of maps like this, which actively incorporated Western knowledge, was extremely unlikely. However, because Shimazu was the father-in-law of Tokugawa Ienari, the Tokugawa shogun at that time, it is said that this relationship made it possible to get approval of the map’s publication from the Tokugawa shogunate.

Saikō, who was also known as Kakusai or Jirōzaemon, was a scholar from the Satsuma Domain and later became an instructor at Zōshikan, the educational
institution of the Satsuma Domain. Ishizuka produced scholarly works on the Chinese language. He also spent considerable time studying geography and astronomy as well. 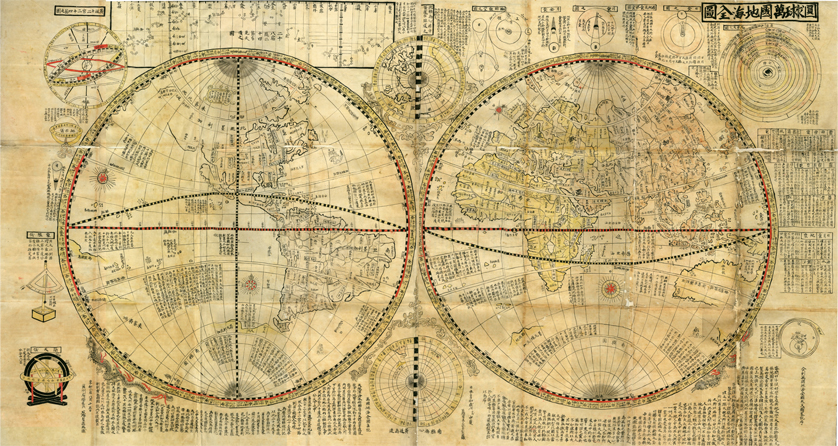