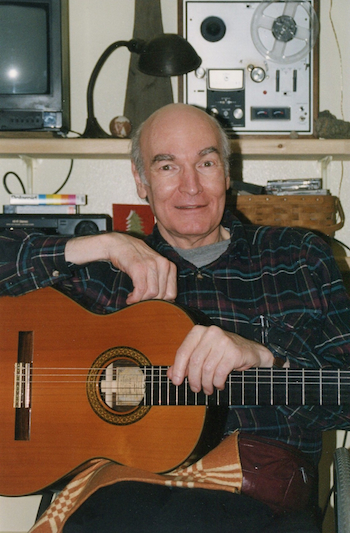 Don Firth (1931 - 2015) was born in Los Angeles, California. His family moved to Seattle when he was critter.  He well remembers, in the late 1940's, listening to the radio shows broadcast by Burl Ives. Then about 1952, Walt Robertson became a local star and convinced Don to pursue the serious study of traditional folk music. Don studied classical guitar, voice, and undertook to learn everything he could about the world of traditional folk songs.

By the mid 1950's, when the Seattle hoots became famous events, Don was a shaker and mover. He taught guitar, appeared in all the venues, concerts, radio, early TV, co-produced the KCTS TV series "Ballads and Books." He was a co-founder of the Pacific Northwest Folklore Society. He performed most every Sunday for six months during the Seattle World's Fair in 1962.

What to listen for: In Don's voice, you will hear a consummate stage performer. His robust bass voice, with perfect control and excellent diction is a joy to witness. He doesn't just sing a song, he study's the song in detail, and will often present the historical background of the ballad. Don is currently writing his memories.