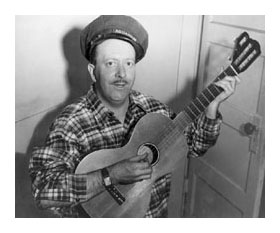 Ivar Haglund was a Seattle landmark. He opened a small aquarium on the waterfront in the early 40's. From that small beginning, he eventually became a very successful restaurateur. I met Ivar when I was ten. Later, during the 1962 Seattle World's Fair, I sang at one of his restaurants. I closed the last set by singing "The Old Settler", which was HIS signature song. He did NOT like the way I sang it. Afterwards, he sat me down at a table, took my guitar, and demonstrated the PROPER guitar accompaniment, and the song phrasing. I've always sung it that way since. Here's more background on Ivar, as well as a documentary.